Thought I'd give the Traveller a decent run as I hadn't been anywhere far on it since about September. I'd also fitted Brembo master cylinders and calipers, and although I'd bedded in the pads running around near home, I wanted to give them a 'proper' run to see how they felt.
I headed off from Kilbarchan (1 on the map at the bottom), stopping at Kilwinning for petrol (2). I then headed down the coast, stopping at Lendalfoot  where I saw what must be the only roadsign in Scotland in English and Russian. I points you into a parking area where there's a monument to a Russian ship which sank nearby. It was called the 'Varyag' and had been a veteran of the Russo-Japanese war, and was on its way to be scrapped when it sank in 1920. I forgot to mark this on the map, but it's just south of Girvan. 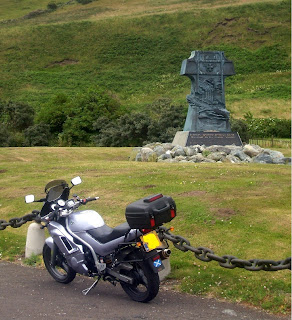 Just as I left here, the rain started and the wind got up. I also got caught up in slow traffic heading for the ferries to Ireland from Cairnryan and Stranraer.
At Stranraer, I headed on towards Portpatrick, which is a particularly pretty town with a small harbour. The weather had improved a bit, so I went for a wander about. 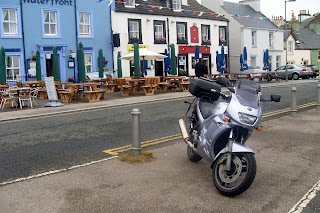 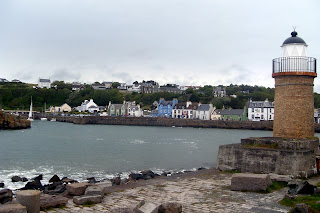 This had been my intended destination, but it was still quite early and I was really getting into riding the bike, so I headed eastwards and rode the 'Queen's Way' through the Galloway Forest to New Galloway. (4)  http://www.forestry.gov.uk/gallowayforestpark
Unfortunately, it started raining again, so I didn't see much of what is a very nice ride up and down twisty roads through the forest with great views. Oh well, will have to come back on a better day.
After New Galloway, I headed towards the Ken Bridge Hotel, where the MZ Riders Club had held rallies in the distant past, then turned right towards Castle Douglas. On the way I stopped in Parton, a very small but pretty hamlet, who's only claim to fame is that it's the burial place of  James Clerk Maxwell.(5)
Maxwell should be one of Scotland's greatest heroes as he was the third most important physicist after Newton and Einstein, but his work is so hard to understand for the layman that he's largely been forgotten. If you're interested you can read about him here: http://www.clerkmaxwellfoundation.org/html/who_was_maxwell_.html 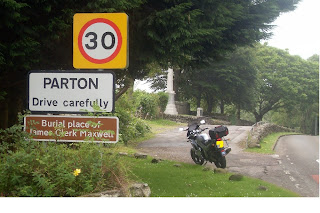 I headed on towards Castle Douglas (in the rain) (6) then on to Dumfries. (7) I had intended riding the Dalveen Pass, but I had forgotten to bring a map and couldn't remember how to get there! Instead I headed up towards Beatock. (8) All this way it drizzled constantly, so there was no point in stopping to try and photograph anything.
At Beatock I rode on the 'old' A74 that runs parallel to the motorway. It twists and turns nicely, and is now almost deserted.
I headed towards East Kilbride (9), then home by back roads. In total I did 276 miles/444 km, and the bike performed flawlessly. The front brake has bedded in well, but the back still feels a bit 'flat' and has slightly too much travel. I'll bleed it and try adjusting the length of the push rod.
I felt really good doing a proper distance on the bike again after such a long time, and hope to get plenty more runs in this year before the weather turns too nasty. 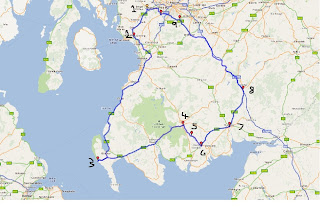 This is going to be an occasional series about bikes I've owned in the past. Unfortunately, I lost almost all my photos when I moved house 19 years ago, so the pictures will be mostly of similar bikes stolen from the Web. 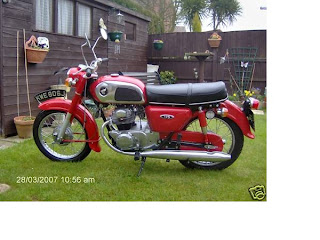 I worked in a factory during my school holidays and purchased one of these for the princely sum of £115. At the time this was more than a month's wages, and my insurance was less than £20.
I learned to ride on this, then rode it from near Glasgow to London and back (c. 800 miles/ 1300 km) three weeks later.

I took an afternoon off school and passed my test wearing a combat jacket over my blazer!
It might not have been a brilliant bike, but this was FREEDOM!!
Posted by Norman at 21:57 5 comments:

Guess who'd forgotten to click on the right button to allow comments!
Posted by Norman at 18:14 No comments: 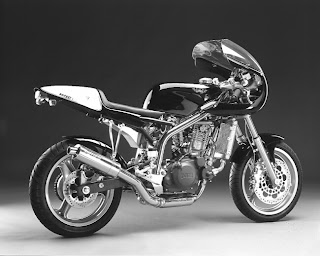 Really cool Skorpion project by VD Classic in France.
Lots of neat bikes on their website. 'VD Classic'
How long did it take them to get it that shiny? 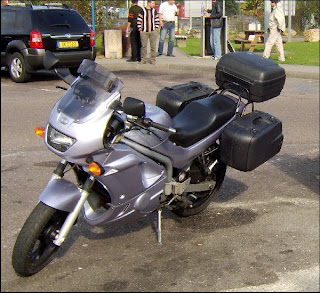 My Traveller in Luxembourg on its way to the Alps in 2008. See! I can post pictures!
Posted by Norman at 20:35 No comments:

Hopefully I'll be able to start posting once I work out what to do!
Posted by Norman at 20:16 No comments: