Weekend in the garage

I've not posted about what work I've been doing on the bikes as it's mostly been tidying up the bikes I intend to sell this year. However, I decided to do some work on the Bonneville this weekend..
Ever since I bought it, it has had some starting problems - it would start OK on full choke, but would die if given some throttle. I had to let it tick over (idle) for about 5 minutes until I could push the choke in, then it would run normally. This was OK until the weather turned colder when it wouldn't start at all. I eventually got it started by heating the carbs with a heat gun (gently!), and it would usually start, though sometimes only on the left cylinder  until it was fully warm when the right cylinder would start.
As I wasn't using the bike over the winter I left it, but recently as I'd booked a two week holiday on it in May, I thought I'd have a look at it. I've been very busy at work recently, usually working weekends, so I decided to book the bike into the local Triumph dealer for a service and to sort out the starting problem, which I assumed was blockages in the starting circuits of the carbs (the bike had been sitting for a while before I bought it). Unfortunately, the dealer is in the process of moving premises, so couldn't take the bike in for a month, so I decided to do some of the other jobs that were needed.
First of all was a new battery. The existing one was a dubious brand I hadn't heard of, and probably made in China, so wasn't helping with the starting as it ran down quickly. I replaced it with a Motobatt. 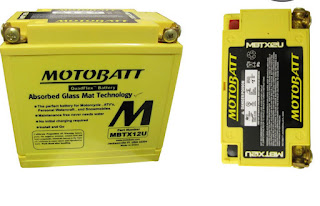 I've bought at least 4 of these over the last few years and could feel the difference immediately. Spins the engine much faster and longer. Well worth the money and you can read the technical stuff here.
Next were the brakes. I'd read in reviews that the Bonneville's brakes aren't the best and those on mine were terrible. Front needed a very hard pull and the rear barely worked at all. I ordered 2 rebuild kits (they are the same, front and rear) from here on Ebay. 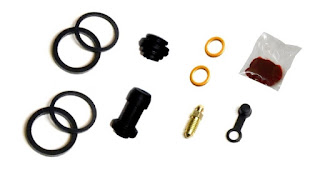 The front caliper came off easily as the bolts had been fitted using copper grease (always a good sign), but it was filthy inside with seized sliders and pistons resulting in one pad being worn more than the other. Dismantling took a lot of work and I had to resort to removing the pistons with Mole Grips (Vise Grips). 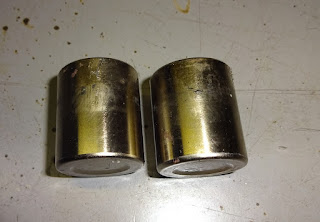 As you can see, the pistons are scratched, corroded and before I cleaned them, had part of the dust seals stuck to them. It looks like the caliper had been cleaned with some solvent which had dissolved the seals causing them to stick to the pistons.

Note: I upgraded the brakes on my Skorpions to Brembos. The former Brembo importer used to have a warning on their website telling you never to use aerosol brake cleaner. The correct thing to use is washing powder (the sort you wash clothes with) dissolved in warm water and applied with a brush (an old toothbrush is ideal).

I've cleaned the caliper as described plus some sessions in my ultrasonic cleaner and it's a bit better. I'll give it another clean and give it a coat of paint whilst I'm waiting for the pistons. 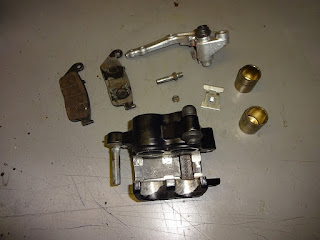 The pistons will need to be replaced and I've ordered some from here. 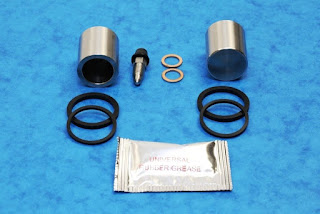 Now it was time to start on the rear and the first problem is actually removing it. For some weird reason, Triumph have fitted the caliper under the disc (where it catches all sorts of dirt off of the road) which means the silencer gets in the way. The pannier frames make the silencer awkward to remove, but I managed to wiggle it enough to get a socket onto the bolts. Once off it was almost as bad as the front. Luckily I managed to remove the pistons without damaging them and gave the caliper a good clean. 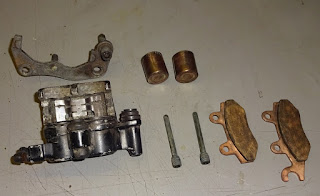 Again it'll get another clean and a coat of paint. The pads looked fairly new, but I couldn't see any maker's name. As I was ordering some new (Brembo) pads for the front I got some for the rear as well. I've had enough pads delaminate and come apart over the years that I'm not going to risk using some when I don't know what brand they are.

Finally, for some unknown reason, Triumph or Nissin (brake manufacturer) used a banjo bolt on the front that has a 9/16" head, but a metric thread! (the rear is 12mm). This meant that I had to buy a socket, so both banjo bolts are going to be replaced with nice shiny metric stainless socket bolts. 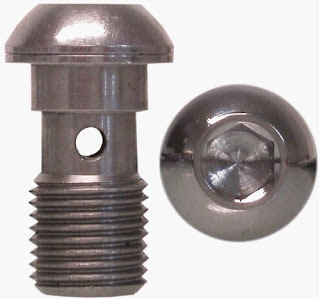 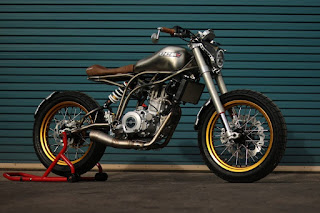 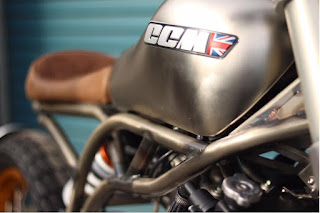 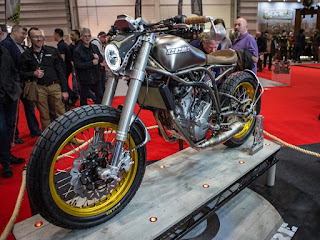 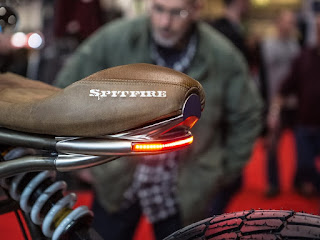 Another rarity from the past... 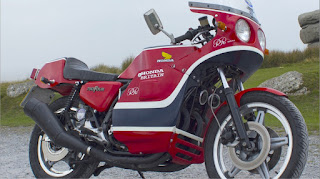 In 1977, Phil Read won the Isle of Man TT Formula 1 race (and world championship) on a bike based on the CB 750 F2 which had been introduced in 1976. Looking to capitalise on his success, Honda Britain launched the 'Phil Read Replica'. They contracted bike builder Colin Seeley to convert standard F2s by fitting a fairing, seat unit, lower bars and rearsets, larger aluminium tank, and a silencer modelled on the racebike's exhaust. 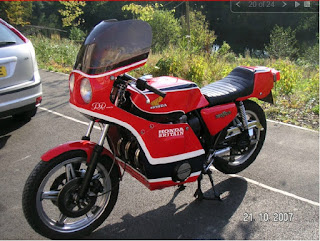 These were rather expensive at the time - £1895, £360 more than a standard F2. Colin Seeley was contracted to build 400 Replicas, but a disagreement with Phil Read meant that only 150 were completed. Honda Britain then had the remaining 250 built with different paint, one of Seeley's silencers, and renamed the CB 750 SS. 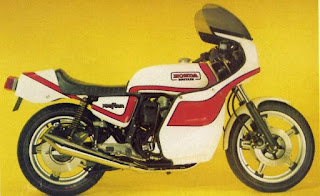 This week's is a bike that I'd only seen once, had completely forgotten about, and only remembered due to a chance remark. 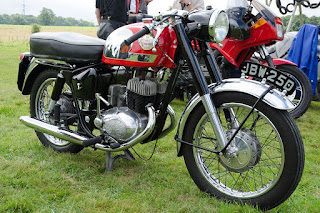 I was talking to someone about bikes and mentioned that my Bonneville had its ignition key on the side of the headlight. They said they had never seen a bike without its key at the handle bars, so I said that my Honda CL 350 had its key under the tank, I remembered bikes with their keys on the sidepanels, then I remembered a bike with its key on top of the crankcases. 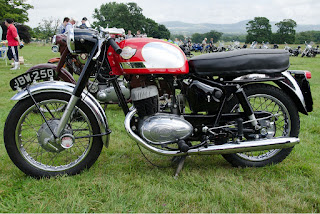 Back in 1976 just after I'd left school, I was out one day and one of my former classmates stopped to say hello on a Royal Enfield Turbo Twin Sports. I remembered him switching off the crankcase mounted key. We had a chat then he rode off. That was my only sighting of a Turbo Twin. 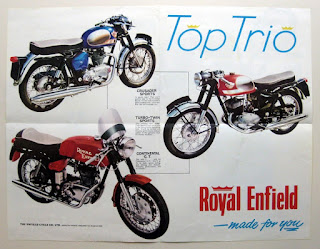 It was a bit unusual as most Royal Enfields of the time were four stroke singles, but the Turbo Twin was fitted with a Villiers 4T two stroke twin engine. It was also one of the last British built REs, with four stroke production continuing to this day in India.

You'll have noticed the lack of turbocharger, so why the name? Apparently it was due to the rubber mounted engine being so smooth and quiet, it was 'like a turbine'!