I'm a fan of finding new uses for achitecturally interesting but unwanted buildings. On a recent trip to Torphins, Aberdeenshire, I found this good example. 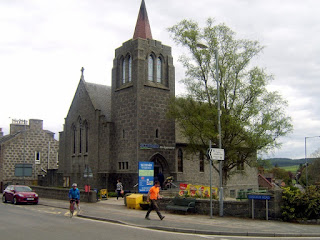 The former church has been transformed into a Scotmid cooperative supermarket, including a bakery and Post Office. 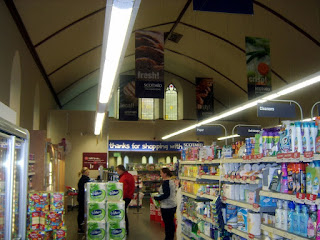 I like how a modern shop has been built inside the building retaining a lot of the original features. 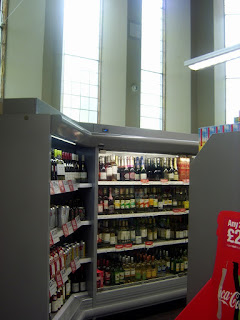 A great use of an unused building and a new 'centre' of the community in the village. 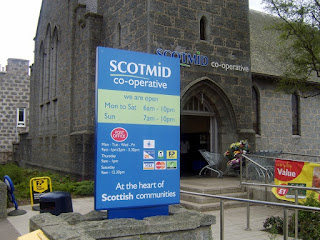 Article about the conversion here.

Sorry I've been a bit quiet recently, but a mixture of being very busy at my new job, some ill health, and not finding anything interesting enough to post, has let to a bit of a silence.

This week's Friday bike is one I've always had a bit of a soft spot for. 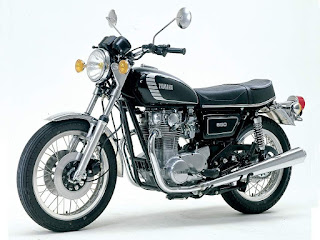 The XS650 is interesting in that it didn't start out as a Yamaha design. Long gone Japanese manufacturer Hosk developed a 500cc twin in the late 50s based on an NSU design. Hosk were owned by Showa, best known for their suspension, and were sold to Yamaha in the early 60s. From the Hosk design the XS650 was developed, being launched in 1970 as the XS-1. This was followed by the XS-2, and later the XS650. Here in the UK we didn't get the XS650 until 1975, when it was the biggest bike in the Yamaha range. 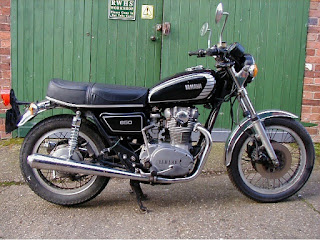 I remember thinking about buying one back in 1979, but I wanted to buy a new bike, Yamaha had replaced the 'normal' XS650 with the hideous custom styled 'SE' version, and it would have been more than I could have afforded anyway. 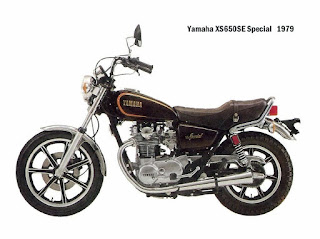 Very popular with the custom crowd, very few good XSs still exist and are a bit expensive as a result. Most seem to have been turned into choppers, flat trackers, or hipster cafe racers. Back in 1986, I moved house and a friend of a friend who lived nearby was working on an XS 650 'project'. He had fitted an XS engine into a Norton Featherbed frame and was building a 60s styled cafe racer out of it. He moved house soon after, so I never saw the completed bike (if it was ever finished!). Found a picture on the Web of a similar bike. 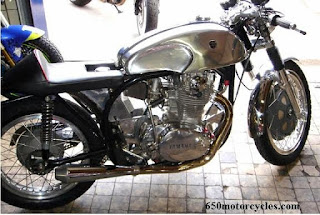 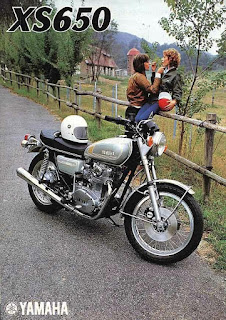 After I'd posted last week's Friday bike, the Yamaha AG200, I got an e-mail from Bob McGrath in Australia with some photos he'd taken when on a run of a farmer (and his dog) on an AG 200, showing how thay are used over there. 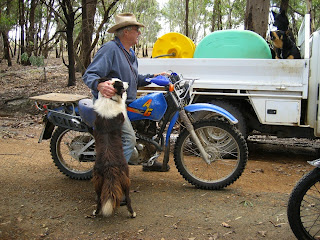 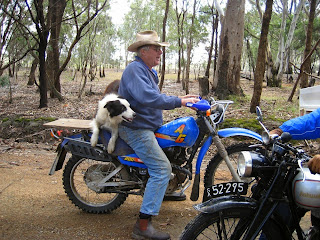 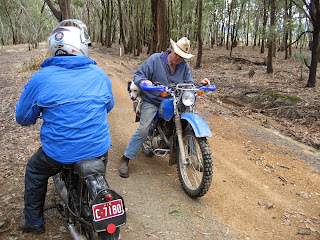 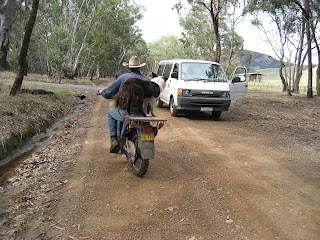 Many thanks to Bob for sending the photos. The Ambassador looks very interesting, what other bikes were you on?

Anyone planning on touring in the Scottish Highlands should visit a new Website promoting the 'North Coast 500'. This is a planned route through the Highlands which takes in some of the best scenery. 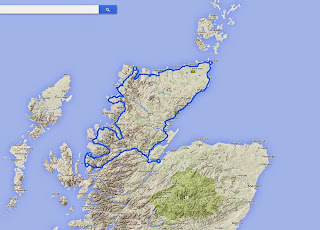 Not much on the Website at present, but you can download maps and GPS files. They also have a Facebook page, and readers in the UK can see a feature on the route from the BBC programme 'Landward' on the iPlayer for the next 29 days.
Posted by Norman at 19:34 No comments:

Was in Basingstoke for a couple of days on a training course, and my company put me up at the local Premier Inn. Outside they had this superb motorcycle parking area. 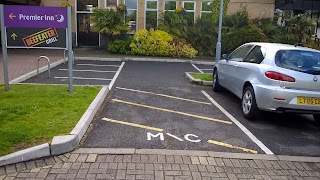 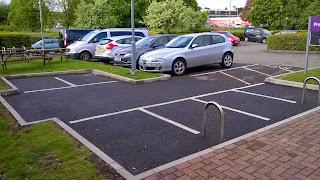 Room for six bikes, locking loops, right at the front door and visible from Reception. I've stayed at a few Premier Inns since I started my current job, but this is the first dedicated bike parking area I've seen. Don't know if any other Premier Inns, or any other hotels, have a similar arrangement, but it would sway me when it came to choosing which hotel to stay in. 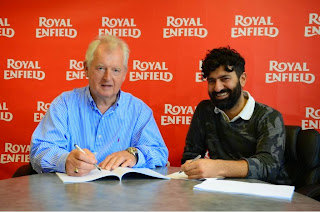 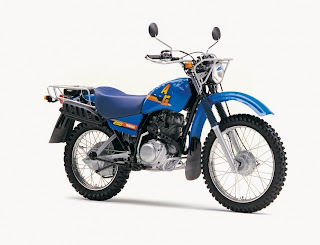 Always loved the look of these. The Yamaha AG 200 is sold in Australia, New Zealand, and parts of Africa and South America. It's a fairly basic 200cc single with front and rear racks, engine and handlebar protection bars, and a fully enclosed and protected chain. 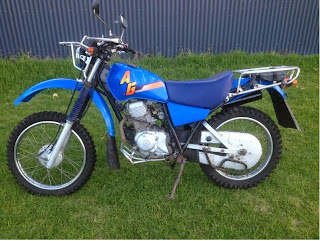 Sold to farmers and NGOs, it provides rugged off road ability with a high degree of 'crashability'. It's been in Yamaha's range since at least 2002, so spares and owner experience shouldn't be too much of a problem, very useful when you might be far from a dealer.
A couple of features I like - a propstand on each side with suitable large foot to allow easy parking on uneven and soft ground, and it has a 'lock' on the clutch lever to allow you to stop it out of gear without having to find neutral.
Why can't we get bikes as practical as this - I'd love one!

Further to my previous post about the Malaguti Olympique moped, here's the other end of the spectrum. 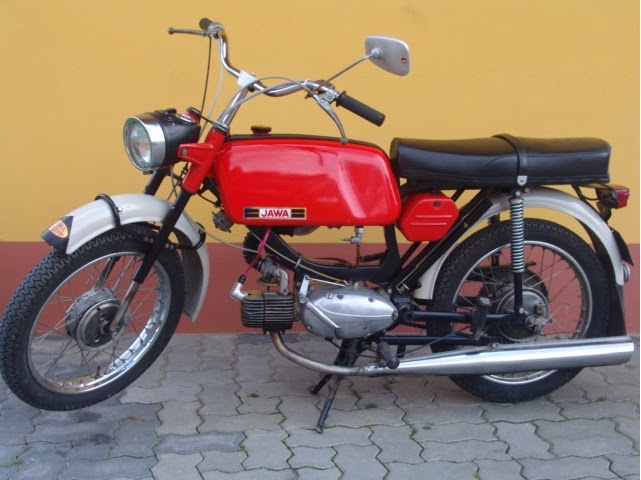 The Jawa Mustang was Czechoslovakian built, and whilst not being anywhere near as good as a Japanese or Italian moped, it was much cheaper. 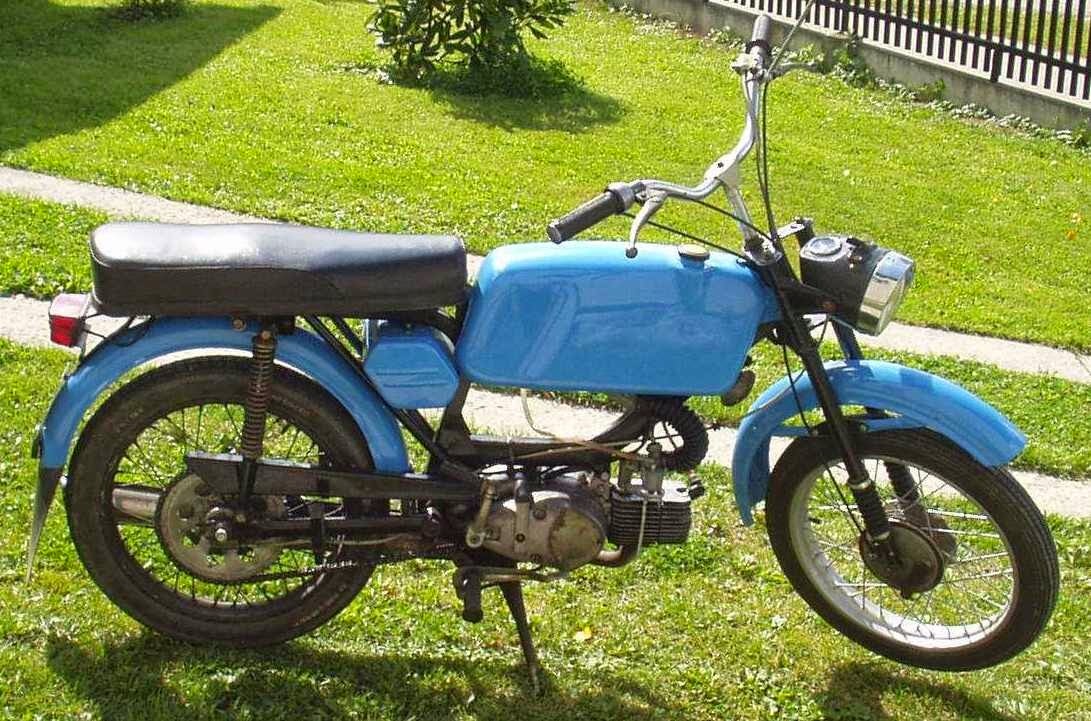 Lower power that other mopeds, and restricted by only having a 3 speed gearbox, you would think that the importers would have taken the 'pile them high and sell them cheap' approach to marketing. After all, a lot of 16 year olds didn't have much money and would be looking for cheap basic transport.
However, the importers tried to tart the bike up by fitting a race type fairing, finished in 'glitterflake silver', (wooo!) and running pathetic adverts like this. 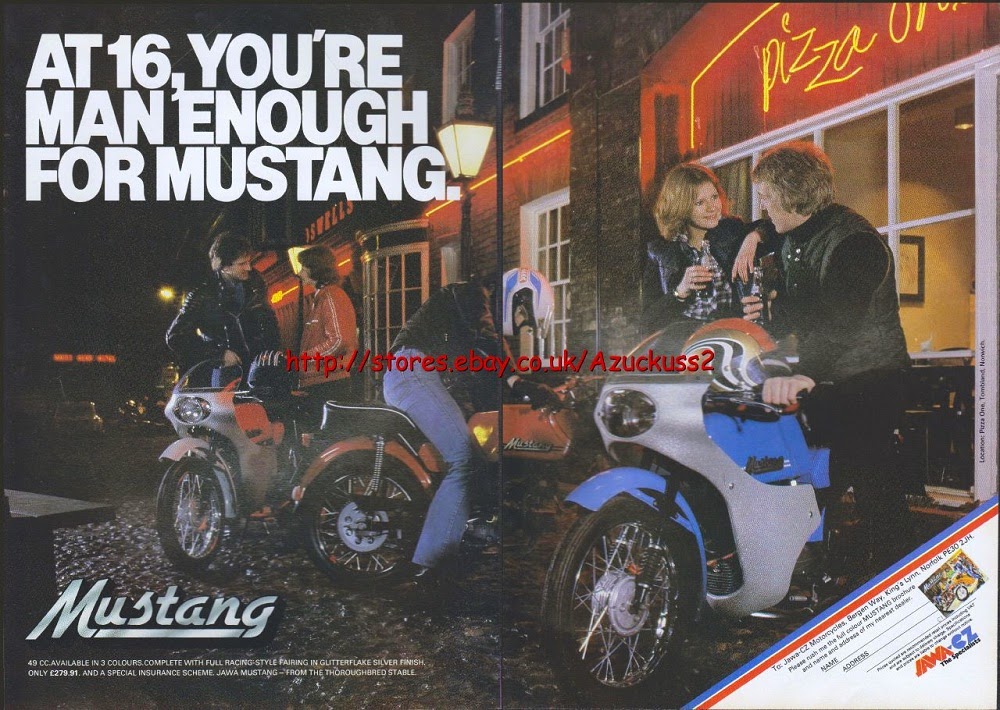 I remember seeing a few in bike shops at the time, and the fairing was one of the cheapest pieces of brittle plastic I had seen, badly fitted, and the headlight still turned with the steering, so on full lock shone inside the fairing! I never saw one on the road, and have never even heard of one since – no surprise there! 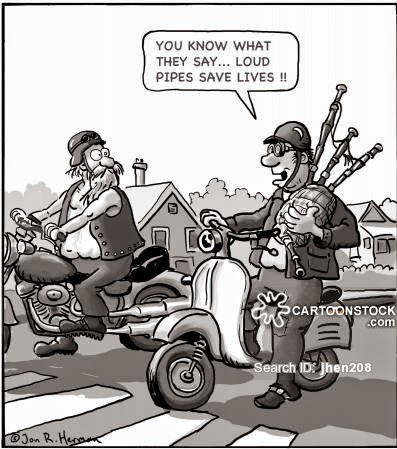