Here's something that I've bought in the past, and is well worth the money.

44 litres 'Dry Duffel Bag' from Aldi. Basically a bag of reasonably thick PVC type material, with welded seams, and a roll top with snap connector. No better or worse than the 'brand name' examples sold in bike shops, but at £7.99 (in the UK), a bit cheaper. Handy for packing you luggage and strapping onto your bike. Reasonably well made and completely waterproof.
Available from  Sunday 1st April. link
Posted by Norman at 13:27 5 comments:

Looking forward to our trip to the Coupes Moto Legende in Dijon, (only two months to go!), I thought I'd feature the Dijon based manufacturer Terrot.
Founded in Germany in 1862 as a machinery manufacturer, they opened a factory in Dijon in 1887, which started building bicycles in 1890, and like so many bicycle manufacturers, they moved into motorcycles in 1902.
By 1929 they had built 100,000 motorbikes, and when the Great Depression came along they diversified on to motorised bicycles.
By the 50s they started building scooter and concentrating on smaller bikes, and were bought by Peugeot in 1958, and the factory closed in 1961. 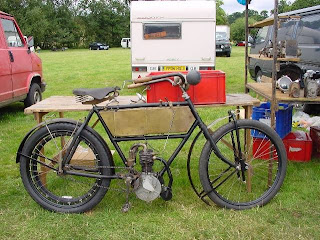 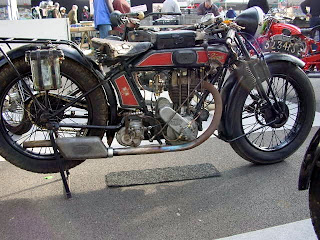 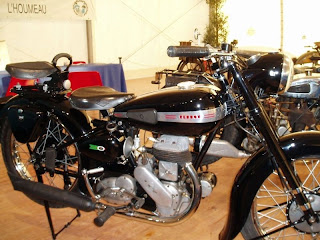 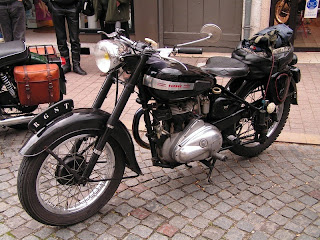 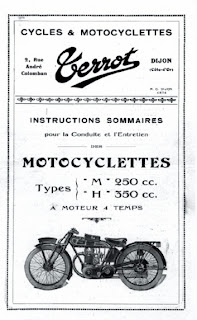 In France there's a Terrot Club so hopefully they'll have some at the Coupes Moto Legende, and I'll get to see a brand of motorcycle that I've never seen before. Don't worry - there will be plenty of photos!
Posted by Norman at 10:57 1 comment:

A whole selection of them this week, all the work of Dalton Ghetti The level of craftsmanship, not to mention patience, is absolutely astounding. Shows what you can do with just a pencil and a few tools (and a huge amount of talent!) 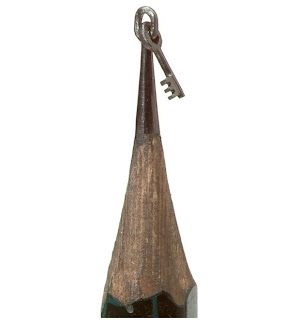 ..... nearly got forgotten! After I'd posted about the Spanish Civil War exhibition, I completely forgot about posting a Friday bike.

Wooler was a British motorcycle manufacturer founded in 1911. They built a range of distinctive bikes, including the one that I spotted at the bike show in Alford in 2009. 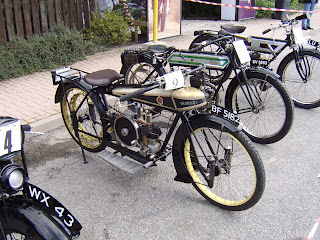 Due to the extended petrol tank and the yellow paint scheme, these were nicknamed the 'Flying Banana'.
The company built bikes until 1930 when they disappeared during the Great Depression.
However, in 1945 they reappeared with a revolutionary bike - a 500cc flat four with the cylinders stacked above each other, and linked by a 'beam' arrangement. 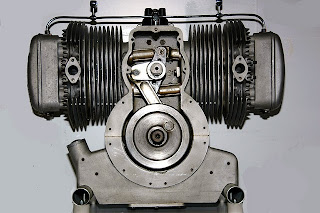 The bike had a lot of interesting features, including exhausts routed through the frame, all the electrics contained within the headlight nacelle, and a pump hidden inside the footrests. British Pathe featured the bike in one of their newsreels. Note how light the engine is, and how the bike really is 'garden shed engineering!'
Despite the positive sound of the newsreel, the bike never actually reached production. Wooler had another attempt, this time with a Gold Wing like flat four in 1953, but only about 5 examples were built before John Wooler passed away in 1956, and the company folded. 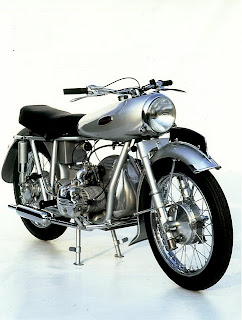 Another of the great 'if only' stories of the British bike industry.
Posted by Norman at 14:37 2 comments:

Went to an exhibition about British and Irish volunteers who fought in the Spanish Civil War today. The exhibition was in Motherwell, and I'd arranged with Terry and mr. combo to meet up there. We had a look round the very interesting exhibition, them went to a cafe for breakfast and a chat.
mr. combo's written a post about our visit, so rather than write another one I'll just direct you there and post some photos I took. 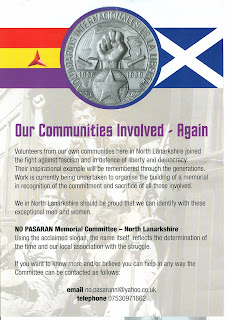 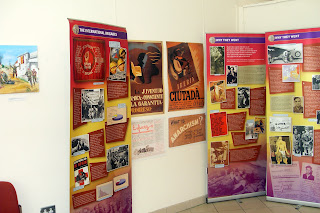 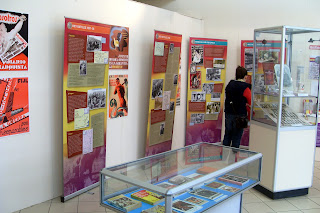 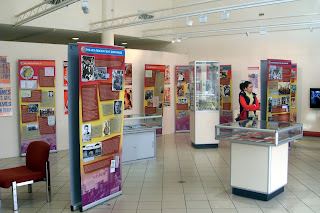 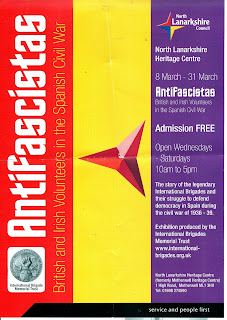 The timing of this was fortuitous as I'm planning on going to Spain later this year, and I'll have to admit it's a country I know very little about. I've only spent 3 days there, and that was mostly taken up with my niece's wedding. What I did see was very interesting, hence my plan to return.
To be honest, all I knew about the Civil War was from George Orwell's Homage_to_Catalonia and a book on Spain that I'm reading at the moment, Ghosts of Spain by Giles Tremlett, so visiting the exhibition filled in a lot of the gaps and by having profiles of local volunteers, added a human dimension to the history.
A good morning out, and it was an excuse for mr combo, Terry, and I to meet and have a chat.
Posted by Norman at 20:54 3 comments: 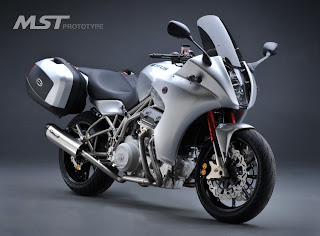 This is the Motus Motorcycles MST, a 1645cc (100 cubic inches) pushrod V four, 'sports touring' bike, built by Motus.
I can see why Motus have built this bike - it's a 'sport tourer' built in a big open country where the choice for touring riders is either a Harley Davidson or a 'foreign' bike like a BMW or a Goldwing. The pushrod V engine is familiar to anyone who's worked on an American V8, whilst the top quality suspension and braking is far superior to anything fitted by H-D.
Their website has lots of impressive photos and videos of the bike, but the main sticking point I can see (other than it being built by an unknown company), is the $30,000 price tag. That's an awful lot more expensive than it's competitors with their established dealer networks and known products.
The bike is supposed to be on the market 'soon', so good luck to them. I can't see it being an easy bike to sell in any numbers, but if it's good enough and they pitch it well, it might attract the niche market buyer looking for something different.
Here's one of the numerous videos from their website. 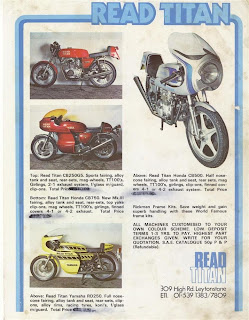 Remember this one? Read Titan used to make all sorts of bolt-ons to turn your bike into a cafe racer. Unfortunately, the weakest part was how well the owner bolted the bits on, so there were a numerous bikes running around with fairings and saddles that had been bodged to fit. Also, few people bought the whole kit and had it painted to match, so there were a lot of 'bitsas'. I'm annoyed that someone has obscured the prices, but I bet they look very cheap now.
Posted by Norman at 17:53 No comments:

The last couple of weeks I've been working long hours doing a particularly boring job in Middlesbrough. Usually, the work means that I don't have time to see anything, but I spotted this interesting sculpture in the Town Centre. 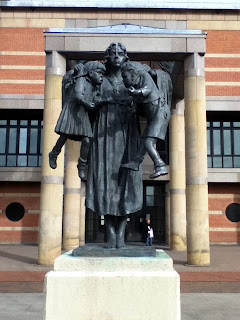 The sculpture, positioned outside a court, depicts 'Justice' holding up two very unhappy looking children. Obviously a wry dig at the two sides in a court case! 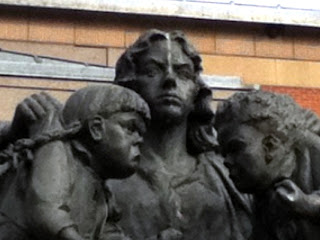 Just look at those faces!
There wasn't any information on the sculpture, but a quick search of the Web revealed that it was made by Graham Ibbeson. His website is well worth a visit, and I really like his mixture of comic and quite poignant sculptures. There are times to be serious and there are times to just have a laugh, and I think Graham's sculptures cover both these situations well.
One I didn't know of, but will look for next time I'm there, is The Fair Maid of Perth. 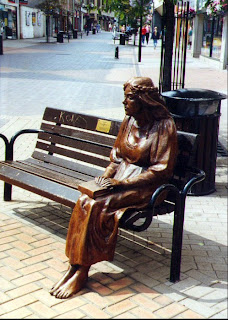 I really like sculptures that aren't on a plinth, but are at street level so you can interact with them. How many visitors get their photo taken sitting next to her?
Graham has also sculpted figures from comedy including Laurel and Hardy, Benny Hill, Les Dawson, and most famously, Eric Morecambe 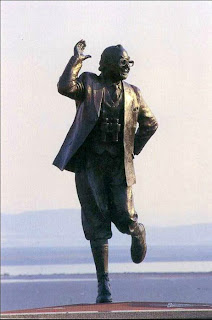 You've got to admit, this is much better than some sculpture of some long forgotten Victorian politician or industrialist that usually populates our town centres. So much better that it was unveiled by The Queen.
It's really strange how me seeing an unusual sculpture in passing has led me to a whole array of works that I'm going to try and go and see, but that's the power of the Web.
Posted by Norman at 23:24 1 comment:

Now that I'm home after working very long hours away from home, I've managed some work on the silver Traveller. I've serviced it, tidied up some of the electrical mods I've done over the years, and repaired a few small things.
Now it's time to continue with improving the suspension, as mentioned earlier. the fork sliders were starting to look a bit tatty, with a number of stone chips that had allowed water to cause corrosion on the surface. Now, had the Skorpion been like a Japanese bike, I would just have stripped the forks and sent the sliders for powder coating. But, as any of you who have tried to take Skorpion forks apart knows, that easier said than done. The forks will jut not come apart, and it got to the stage where I thought something was going to break before the sliders and stanchions separated.
Time for Plan B: Mask the stanchions to prevent damage and 'overspray', and repaint the sliders myself. I had intended stripping all the old paint, but even several attempts with Nitromors couldn't shift the original paint at all. So, if this paint won't come off readily, why not leave it in place? I removed any loose paint with a scraper, gave the forks a good wirebrushing to remove any corrosion. then smoothed down the surface with some 'wet and dry'. I sprayed a coat of primer onto the stanchions to make it easier to see the craters in the surface caused by missing paint and corrosion, then filled them with body filler. 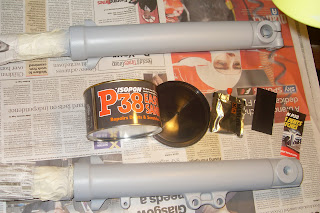 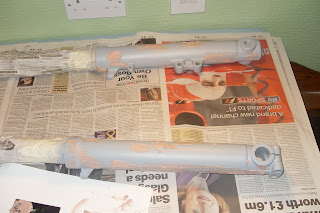 I'll leave this to set overnight, then smooth the surface with 'wet and dry'. If any of you intend doing this on your bike, and do it indoors (one of the advantages of living on your own), then bear in mind that P38 filler in VERY smelly! Think I'll leave the window open overnight!
Although I thought it was smelly, my cat Misty didn't seem to mind as she watched closely what I was doing, 'supervising' my work. I thought the smell would drive her from the room, but it didn't seem to worry her.
She also likes 'supervising' what I do on my computer, especially choosing what to listen to on iTunes: 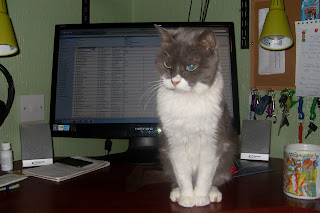 I'll start smoothing the filler down tomorrow, and if it goes well, give the sliders another coat of primer in preparation for the paint. Watch this space!
Posted by Norman at 22:44 1 comment:

Been working away from home again, so haven't had any time to post anything. Here's another clever video:

....on a Saturday again! I've been working away from home again, so haven't had any time to find anything. So I'm going to cheat and reuse something I posted on Facebook. I bet you all wish you had a bike like this!