Bikes on the Beach - St Andrews


The weekend was the first sunny weekend of the year, so I looked around for something to go to and saw the Bikes on the Beach meeting in St Andrews.

This was a combined run and get together organised by The Scotorian Biker who organises similar events throughout the year.

They had meeting points in South Queensferry and Kirkcaldy, but I rode directly to St Andrews as I'm not a great fan of group runs. 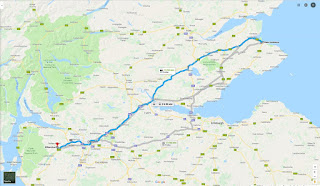 It was a nice sunny day, not too cold and with a slight breeze, so the run over was very pleasant. Once in St Andrews I hit the first problem - the meeting was advertised as being by the beach, but how do you get to it? Signposting in St Andrews is very poor so I had ride round the town a few times before I found the right road.
Eventually I got to the beach and found a few bikes already there. When I stopped the riders asked me if they were in the right place as they'd seen a number of bikes riding past them along the coast. I waited a while then rode along the coast to another parking area where there was a group of bikes and was asked the same question. I rode back to the first car park and left the bike and walked into town to get something to eat.
There were a number of bikes riding up and down and I was asked three times where the meeting was. 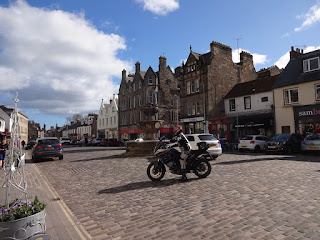 I was taking a photo of a particularly pretty street when this rider came into view. I'd seen him riding up and down, obviously lost.


I walked back down to carpark 1 where more bikes had arrived. 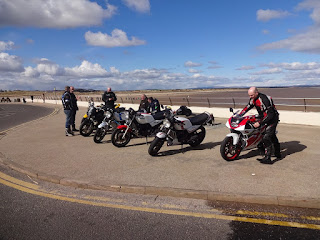 When's the last time you saw this many Yamaha 2 strokes?

There were a lot of bikes riding past so I went to carpark 2 which seemed to have the bulk of the bikes, but some were parked on the grass and some in a turning circle. 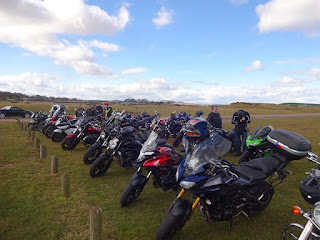 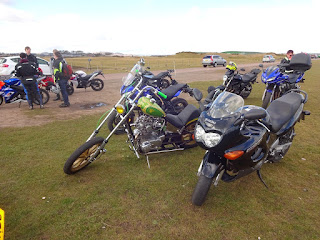 We had a visitor from 1969 who had brought his bike in his time machine! 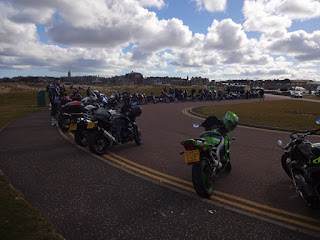 A bit overcast at this point 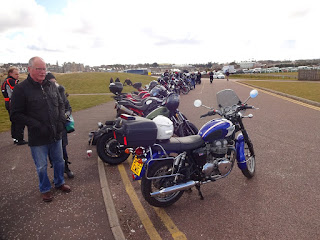 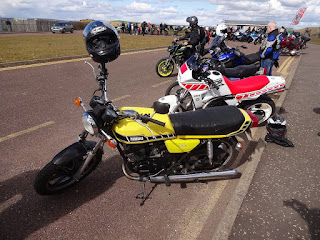 More 2 strokes - where have they come from! 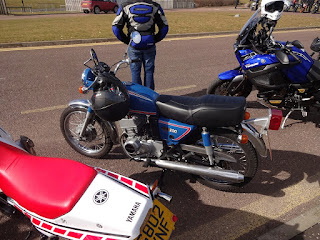 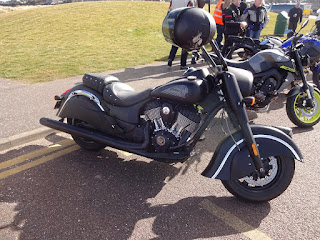 Not really my 'thing', but the coolest bike there.

I had a good look at the bikes and waited to see if anyone I knew turned up. I didn't see anyone, so rode back to carpark 1 for a look at the bikes there. Eventually I started for home and saw a group of about a dozen bikes in a parking space in the town. One rider signalled to me so I stopped and he asked where the meeting was. I started to explain, but his friends decided they had been there long enough without finding it and had decided to leave.

My journey home was fairly uneventful, to vary the route I rode via Kirkcaldy and over the new Queensferry Crossing over the River Forth (my first time over it).
A good day out and no rain!

Confusion over the meeting point aside, it was a good day and the Bikes on the Beach meetings are well worth attending. List of this year's meetings here.
Posted by Norman at 21:17 No comments: 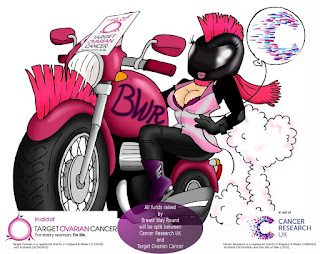 'Breast Way Round' is a group of (mostly) women motorcyclists who organise events to raise money for cancer charities. They are well known at motorcycle events with their stalls and pink clothing. This year's major event is a 500 mile / 800 km, 3 day ride for 100 riders starting from Rugby Park, Kilmarnock on Friday, 25th May and finishing at Loch Lomond Shores on Sunday 27th May. They will be raising money for Cancer Research UK and Target Ovarian Cancer. 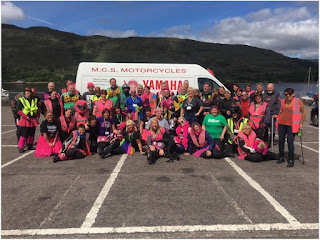 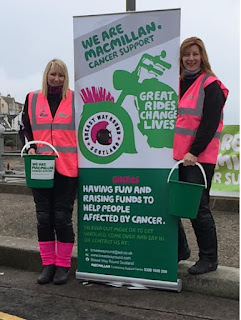 Almost everyone will have know someone who suffered from cancer (I lost my mother to cancer when she was only in her early 50s), so please dig deeply and help support this very worthwhile event. 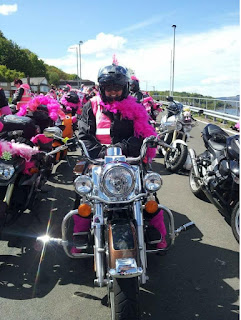 They love their pink clothes!

My friend Shirley will be taking part, her fundraising page is here.

If anyone is within travelling distance of Kilmarnock next Saturday (17th March), they are holding a collection at MCS Motorcycles. Website.

Was in France for a week recently on a business visit. This was a repeat of the trip I made in December 2016, however this time there were 4 of us rather than 3. Also, to avoid the 13 hours journey by public transport, we flew from Glasgow Airport and hired a car.

One small problem was that there is only one flight from Glasgow to Paris on a Sunday, and that gets in quite late, so we arranged to fly on the Saturday and spend a night in Paris (well, you would, wouldn't you!)

We got an early flight, got to Paris CDG airport and picked up our hire car. 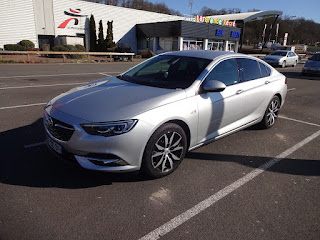 It was a very well specced Opel Insignia with lots of electronic goodies, my favourite being the 'head up' display that projects speed etc onto the windscreen in front of you. As an aside, the car is branded as Vauxhall in the UK, but Opel elsewhere (except Australia and NZ where it's a Holden). It's built in Germany by a French owned company, but if they stick a Vauxhall badge on it, some people think it's British!

I had the joy of driving an unfamiliar left hand drive car on the right side of the road whilst trying to remember to use the clutch (I've been driving an automatic for the last 6 months), through the busy streets of Paris. As I mentioned in a previous post this included going round L'Etoile around the Arc de Triomphe. 12 roads join with no 'give way' lines or road markings! It wasn't that busy, and you learn the technique of 'going with the flow' and I got round it OK.

We got to our nearby hotel, dropped off our luggage, and went for a wander round Paris. 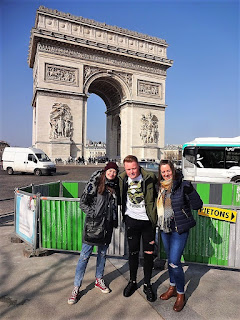 Sarah, Reiss and Louise at the Arc de Triomphe 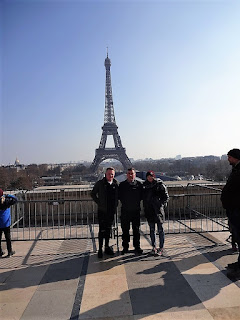 Reiss, me and Sarah with the Eiffel Tower in the background 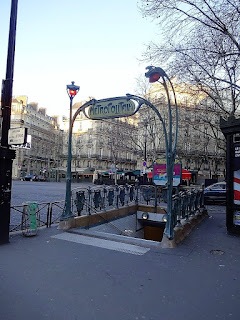 Now that's what I call a Metro station! 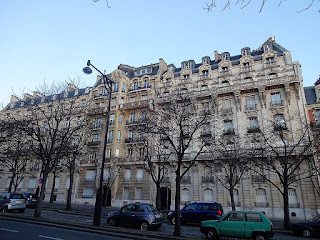 Saw lots of the sights, then got on the wonderful Metro to The Catacombs These are amazing underground chambers full of the skeletons of Paris's dead. There's apparently 6 million skeletons and chanbers lead off into the distance. If you are thinking of going I would advise buying your tickets online in advance. We paid 29 Euros, which included an audioguide, whereas a ticket at the door costs 13 Euros, plus 5 Euros for the audioguide. This might sound steep, be we went straight in whereas those buying a ticket at the door were having to wait 3 hours to get in. 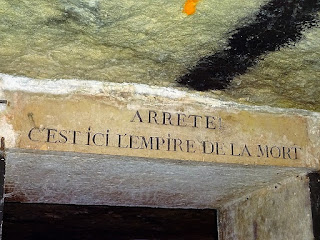 Stop! This here is the empire of the dead. 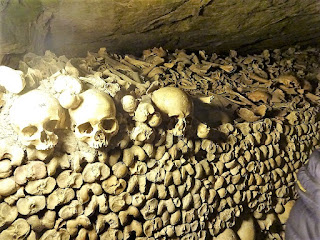 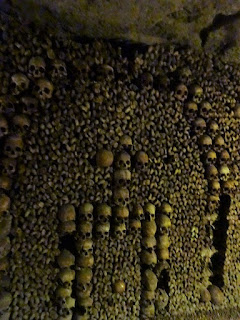 After that we went for something to eat then got the Metro back to the city centre. It was now dark and many of the sights were illuminated. We got back to the hotel, soon after the others decided to go out and ended up at the famous Moulin Rouge. Me, being a lot older than them and I don't drink, ended up going to bed early! 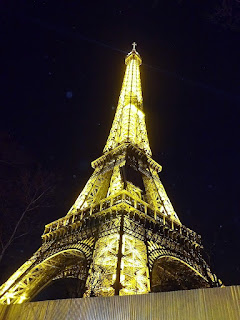 Next morning I drove 200km / 120 miles to Vendôme where we would be based for the next few days. 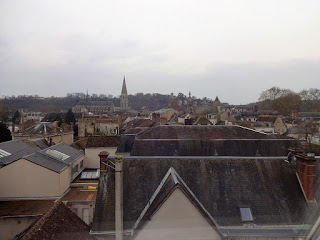 
I'll not bore you with the details, but we spent 3 long days at a factory looking at a piece of equipment, and the people there were superb hosts, taking us out to good restaurants for lunch and dinner every day.

The plan was that we would finish at the factory on Wednesday, stay the night in Vendôme, the drive up to Paris for our flight back to Glasgow on Thursday. However, there was heavy snow, airports were closed, flights cancelled, roads blocked etc. We decided to drive to Paris to then see what flights (if any) we could get. 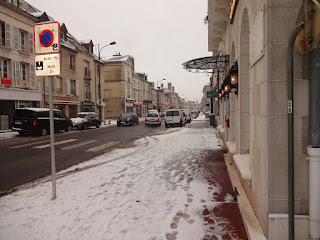 Outside our hotel on Thursday morning


We set off on Thursday through snow that thankfully cleared as we got near Paris, returned the hire car, then found there were no flights that day. We stayed at a hotel at the airport having bought tickets for a flight to Glasgow via Birmingham, early the next morning.
We got the flight to Birmingham, and were called to the gate for the flight to Glasgow. While we were waiting we were told that the flight would be delayed by 20 minutes. I thought this was unlikely as there were no aircraft on the apron outside the terminal, and after a lot longer than 20 minutes were were told to follow an official who took us through a maze of corridors before taking us back to the entrance lounge where we were told to join a very long queue where 'things would be sorted out'. After about 2 hours we still hadn't got to the head of the queue, and on the phone we had found out that Glasgow Airport was closed, and there were no trains going north of Carlisle. All this time we were given no information by the airport or airlines! Eventually, we decided to hire a car and drive the 300 miles / 500 km home. Luckily the 3rd company we tried would hire us a car, and we got into a Vauxhall (Opel elsewhere) Astra and headed north. Once out of Birmingham, the snow cleared and it was a fairly uneventful drive to Glasgow. 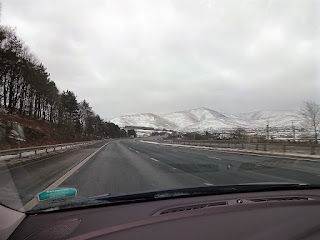 Approaching Tebay on the M6
In Glasgow there was fairly thick snow and after I'd dropped the others off at their houses, I managed to get stuck. I was about to abandon the car and start walking when some locals came out of their houses and manhandled my car onto a drivable road - times like this you appreciate the kindness of strangers!
Got to about 2 miles / 3 km from my house when I hit something hidden on a snow covered road – probably a pothole. Just after the 'low tyre pressure' light came on – I had a flat tyre! I changed the wheel at the side of the snow covered road whilst being showered with slush from passing cars, and my hands were so numb I could hardly open the car door. Finally got going only to have to abandon the car 200 metres from my house and walk the last bit!!

It was a good and interesting trip, but I cold have done without the excitement of the last 2 days!