I'd previously mentioned that I was planning a 'Retirement Trip' this year taking in a couple of music festivals before heading to Spain for 6 or 7 weeks. Unfortunately, I've had to re-plan the trip due to circumstances beyond my control. My father died last year at the age of 95 and the family was left to deal with his will, sell his house etc. Unfortunately, the wheels of the Scottish legal system turn painfully slowly and it has taken a year to get permission to sell his house. During this time I couldn't plan anything as I didn't want to be away from home when legal documents needed to be signed. As I'd already bought the tickets for the music festivals, I'll be going to them then returning home with the Spanish part of the trip delayed until May next year (more about that later).

Last time I went to a music festival I went in the car, but this time I'll be going on my bike. With all the disruption caused by Covid, I haven't been for a good trip since my 'Trip Round the Neighbours' holiday back in 2017 and I want to try out some new things I have for the bike before the Spain trip.

So, on Wednesday 3rd August I'll be heading to the Wickham Festival. This is going to be a long boring ride of 441 miles / 710 km, almost all on motorway but I'll grit my teeth and get on with it. 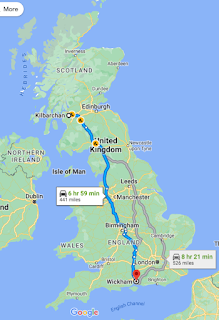 Luckily, you can camp at the festival the night before it starts, so I've got all day to get there. The '6h 59min' on the map refers to the time it would take if you rode at the speed limit without stopping. With rest/fuel stops and the inevitable holdups, a few more hours need to be added. The festival has an interesting lineup, however lacking Van Morrison who was a headliner when I booked back in 2020. 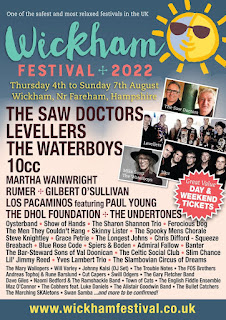 After the Wickham Festival I've a few days before the next festival, so I'll find somewhere to stay locally and explore the area. I've not been to this part of the country before and a couple of places on my list are The Sammy Miller Museum and the National Motor Museum.

The next festival, Cropredy Convention is only 100 miles/160 km from Wickham so it'll be an easy ride there. I've been to Cropredy before and they always have a good selection of acts. 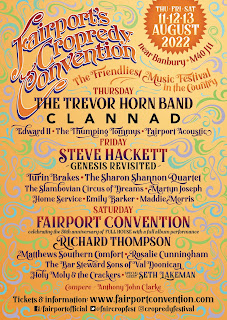 After that it'll be another boring ride up the motorways home.

While I'm away I'll try to update the blog and my Facebook page but it will depend on Internet access, battery life, how much I can be bothered, etc! However, I will take lots of photos and videos and post them when I get back. 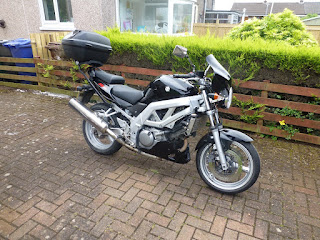