Rode into Glasgow today for the Distinguished Gentleman's Ride. It was a bit wet so I had to wear waterproofs on the way there, but it dried enough that I could take my overtrousers off. Once again, due to the Covid-19 restrictions this was a 'solo ride', with each participant riding by themselves and not in an organised group. I decided to ride around some landmark buildings in Glasgow and take some photos. 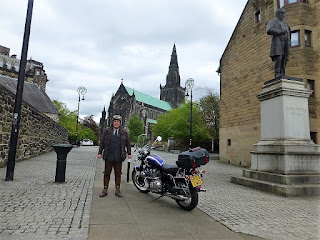 Next was George Square. 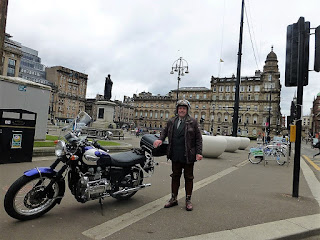 Coming away from George Square a Police van stopped next to me at a set of traffic lights and an officer looked at me in my dapper riding costume, smiled and gave me a 'thumbs up'! Next stop was  Riverside Museum 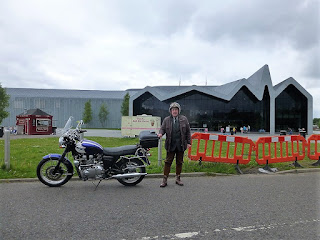 I had intended visiting Kelvingrove Art Gallery and Museum but crossed the river before I remembered! I rode on to one of my favourite Art Deco buildings, Luma Tower 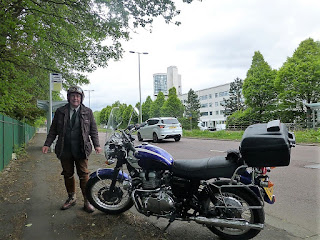 I called in at Triumph Glasgow, finishing point of previous Rides, but it was closed and there was no-one there. (I had though some other riders might have been there). The rain started getting a bit heavy, so I headed home.
I was a bit disappointed that I didn't see anyone else taking part in the event, but that was inevitable due to us all riding separately. Hopefully next year's event will be a group ride once again.
The purpose of the Ride is to raise funds for cancer and mental health charities, and you can still donate on my page. 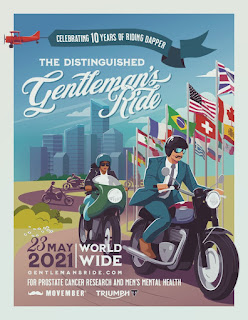 A ride on the cyclepath

Sorry for being a bit quiet but I haven't been anywhere interesting on my bike due to the, soon to be relaxed, Covid-19 restrictions.

About a week ago I went for a ride along my local cyclepath from Kilbarchan to Lochwinnoch. This is part of the Sustrans Route 7 and is built on the trackbed of the Dalry and North Johnstone Railway more commonly know as the 'Kilbarchan Loop', which closed in 1966.

It was a nice sunny day, so I decided to shoot some video, the first time I'd videoed from a bicycle. The camera was mounted on a chest strap with an external microphone clipped to a strap on my helmet. It was really just an experiment to see what it would be like.

Found a photo of the old Kilbarchan Station. I don't know when the photo was taken, but the line was only 2 tracks wide at the time, it was later widened to 4 tracks. Next to the station was a gasworks, so trains would stop on one of the 'extra' tracks to unload coal. 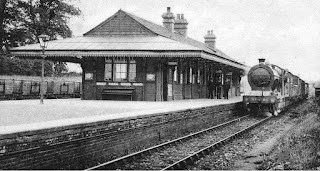 The 'tower' I pass is Kenmuir Hill Temple, more details here. Note the very Scottish euphemism ' made his money in the West Indies ' - he was a slave owner. When I was at school we were taught that no Scots were involved or profited from slavery, blatantly untrue, and there is still a degree of denial on the subject. I've walked up to the 'temple' a number of times, there is a very good view from it. 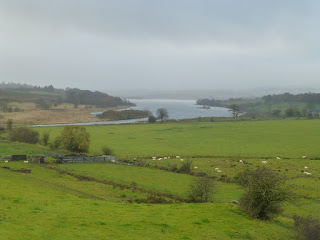 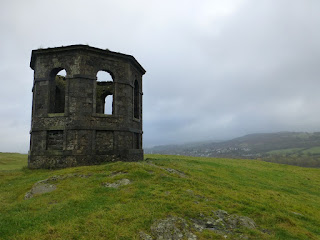 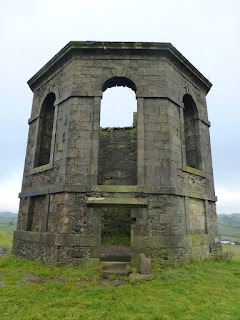 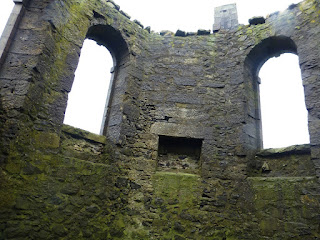 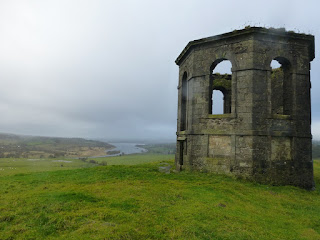 The outdoor centre at is within the Castle Semple Country park which has a lot of woodland walks.

It was a very nice day out but it reminded me of how unfit I am!