One I hadn't heard of until today. 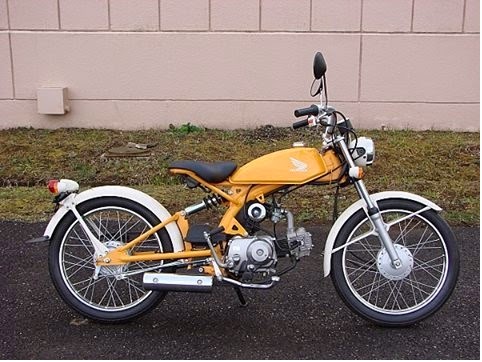 Japan only model sold in 2003, the Solo was powered by the well proven 50cc C50/Super Cub engine. 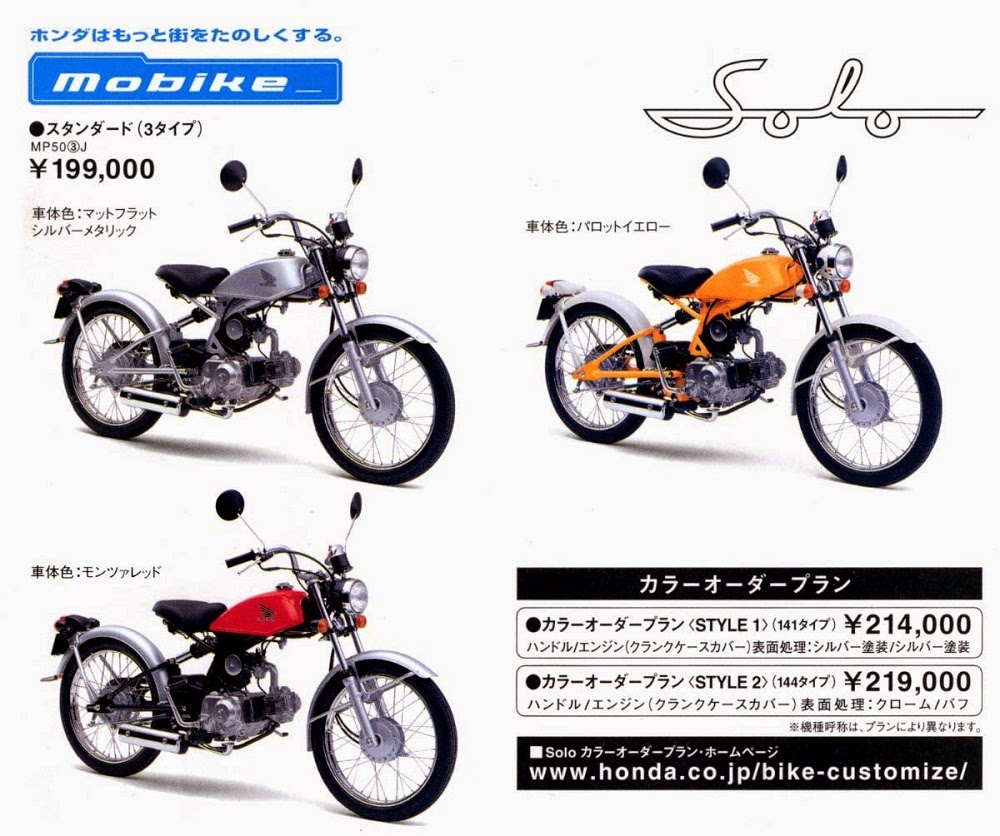 It's unique feature was that when you ordered one, you could specify the colours of various parts, and in theory there were 285 colour combinations! 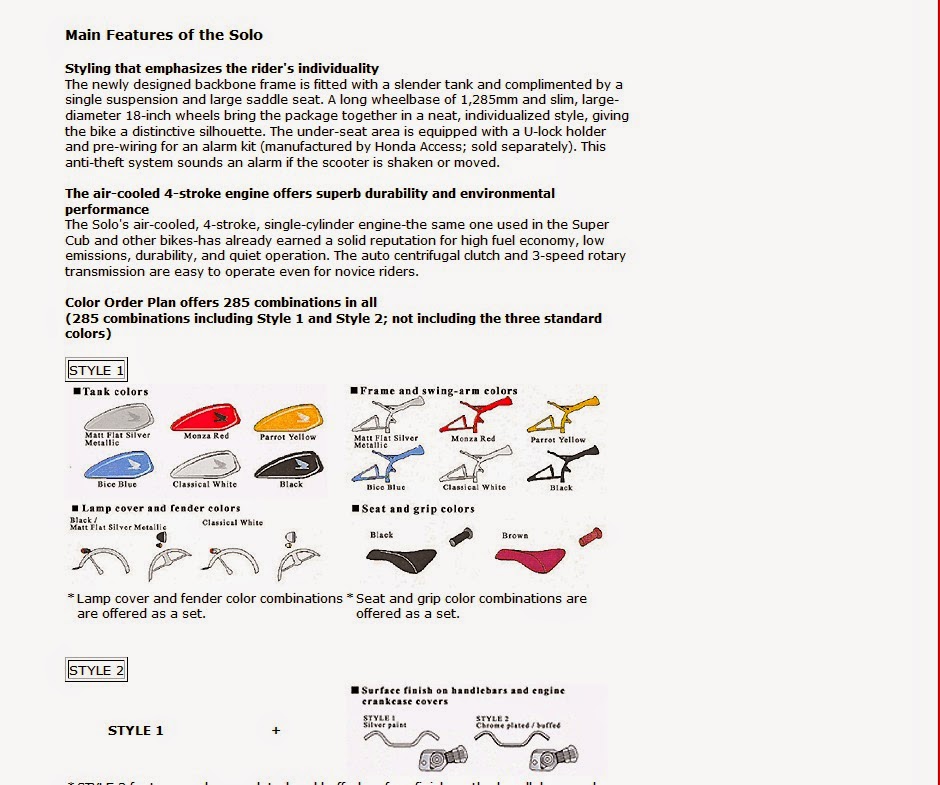 You've got to admit - it's pretty cool looking! 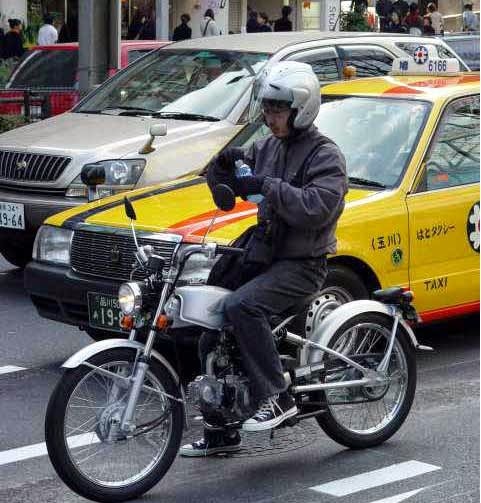 Yes, I know I mentioned this nearly a year ago, but I've now started making and selling electrical kits for bikes on Ebay. 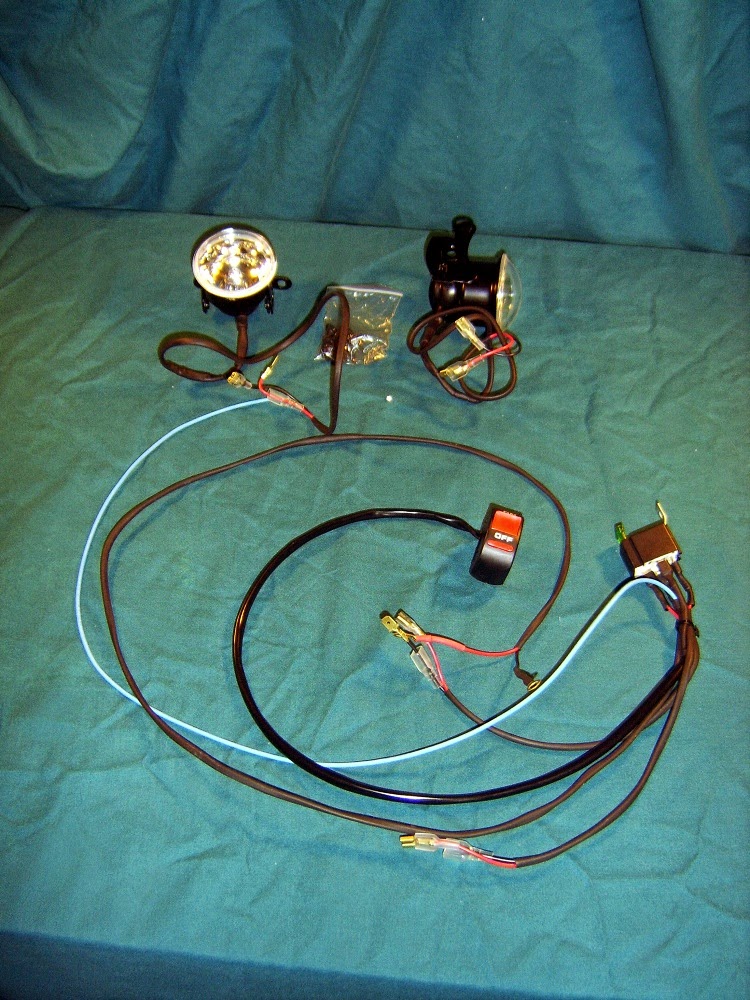 First will be a twin spot light kit containing spotlights, wiring loom (made by me and including a fused relay and handebar switch). I've made a small batch to see how quickly they sell (if at all!), and if they are successful, other kits will follow. These are listed here, but as this will expire, keep an eye of what I've got for sale on my seller's page. 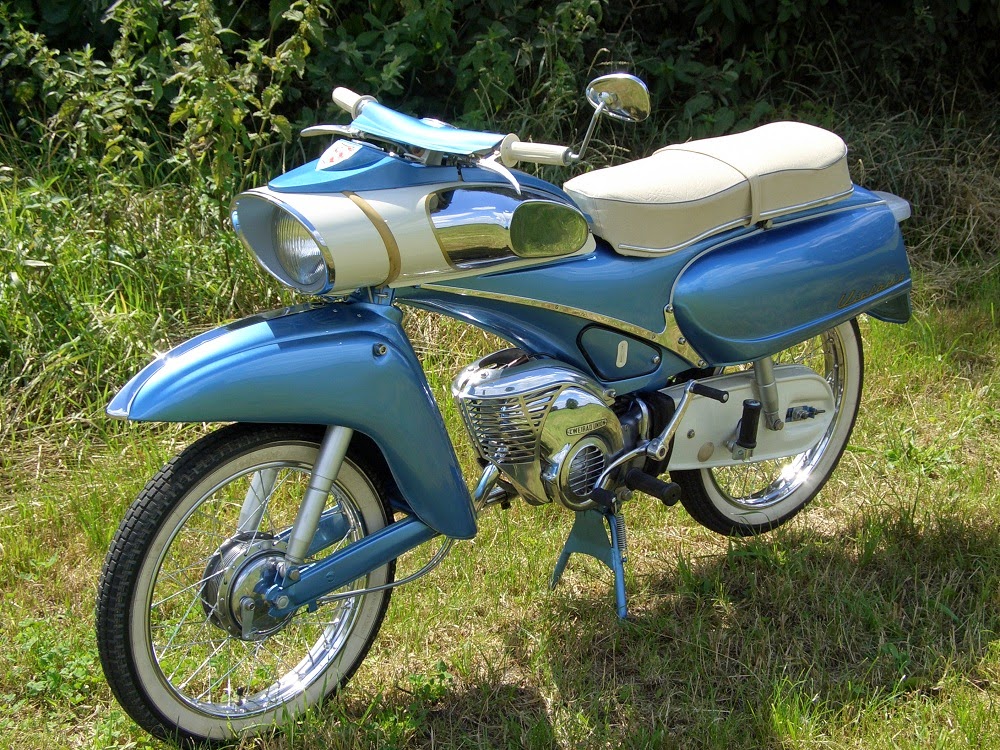 Cool or what? Found a picture of this moped and did a bit of digging, but came up with two names for it! I've found it referred to as the DKW Typ 155 and as the Zweirad Union Victoria.
Whatever it is, isn't its styling fabulous? It appears to have been built in the late 50s and early 60s, and I assume that its 50cc. Also, its nickname was 'Blechbanane' which an online translator translates as 'plate banana'! I assume something has been lost in translation, so any German speakers know what they mean? 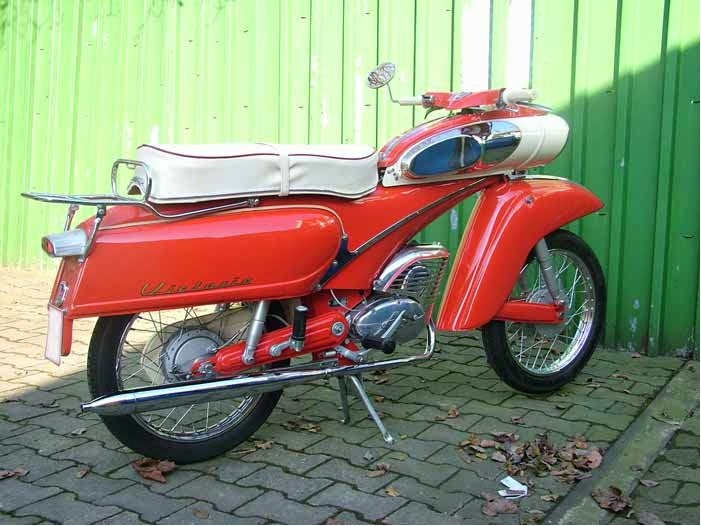 Found a video of one being restored.

This week's is another bike my friend Pat told me about. 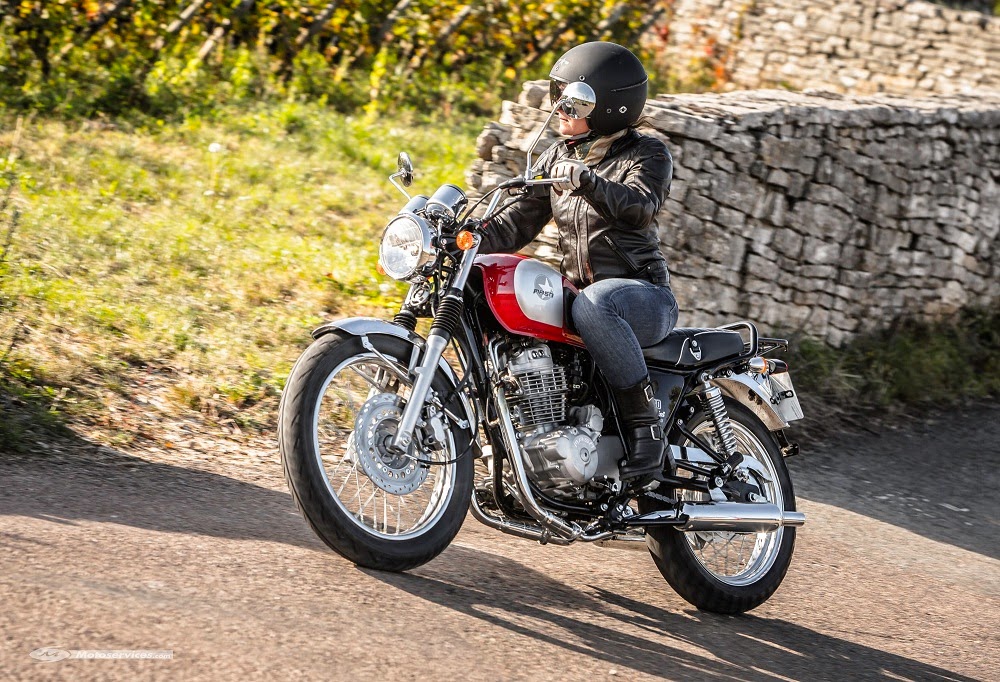 Despite its name, this is a 397cc 4 stroke single producing 27 bhp. 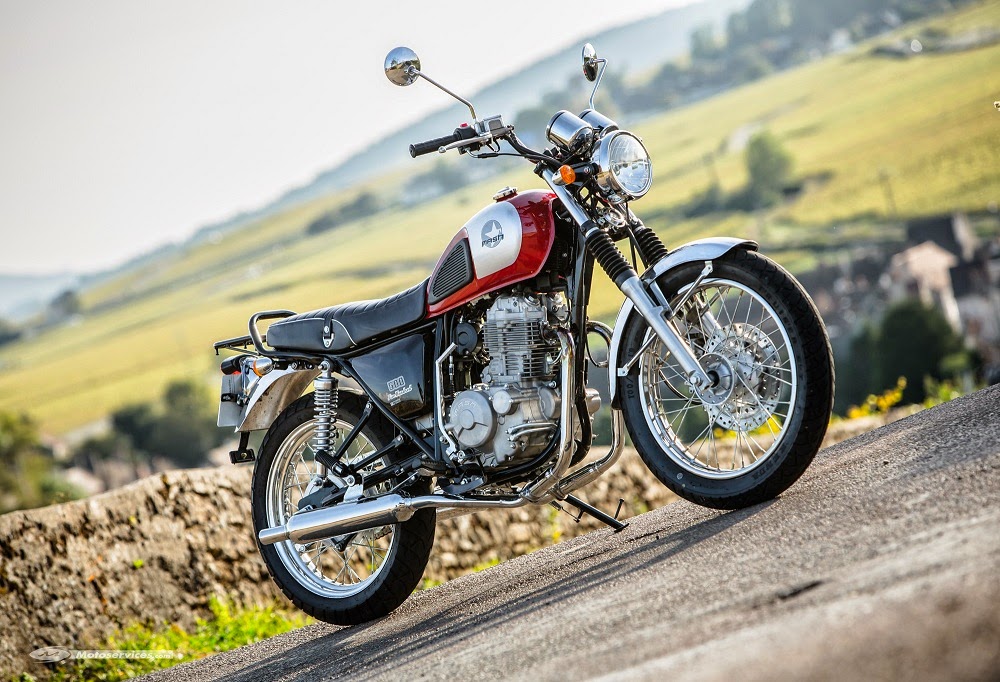 Very nice styling, similar to a Yamaha SR 400/500, with a bit of Triumph Bonneville thrown in. I really like the exhausts! 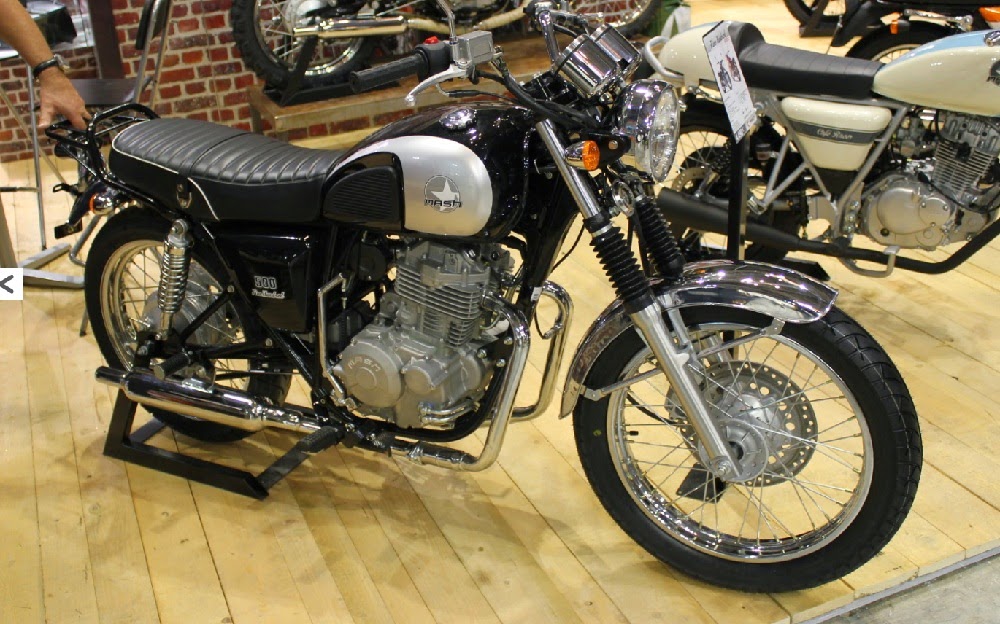 As far as I can make out, it's built in China possibly by Shinerey, and is similar in styling to bikes sold under the Sinnis banner. Engine looks like a Honda XR400 and is probably based on it.

(Bear in mind that some of these are net price, some are 'on the road' price, and taxes vary from country to country, so the prices are just listed as a guide.)

Technical spec (in French, but you can work it out)

Looking forward and back 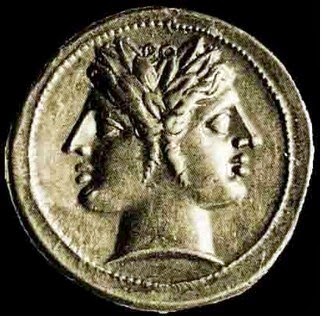 About a year ago I wrote a couple of 'looking back' posts (1,2) and a 'plans' post, but this time I'll combine them as there's not really that much to report.

At the end of 2013 I was unemployed, on my own, and a bit short of money. Despite numerous telephone calls (that weren't answered then became 'unobtainable), and numerous e-mails, also not answered, I got no further with the agency that had employed me to do telecom installation, so have never managed to get my outstanding wages! At this point I was desperately short of money, so was happy when I got a job as a home delivery driver for a major supermarket chain. As seems to be a trend, things didn't work out as planned with the work being hard, hours antisocial, the the wages much lower than expected. Indeed, if you counted in the unpaid hour at the start and end of each shift loading and unloading the van, I was actually paid below the National Minimum Wage.
Luckily, after only 3 weeks in the job I got offered a better, and properly paid job as a Service Technician with a healthcare company. This was a permanent job and was a great relief after about 18 months of unemployment, and short term and low (and un!) paid work. Getting this job has meant that I could, at last, start paying off my debts and planning for the future. I knew this was going to take a while, so 2014 was going to be a 'fallow year'.

I settled into the job and in March I finally paid off the mortgage on my house. This required some extra costs, so further into debt! It's a kind of strange feeling as when you take out a mortgage, the date you pay it off seems like infinitely far in the future, but once it arrives it's a weight off your shoulders. I can't say it wasn't tinged with sadness as I started the mortgage when I first got married and never thought that by the time it would be finished I'd be on my own.

The 'fallow year' meant that I didn't plan a holiday this year and the nearest to one I took was a weekend in Applecross in June. 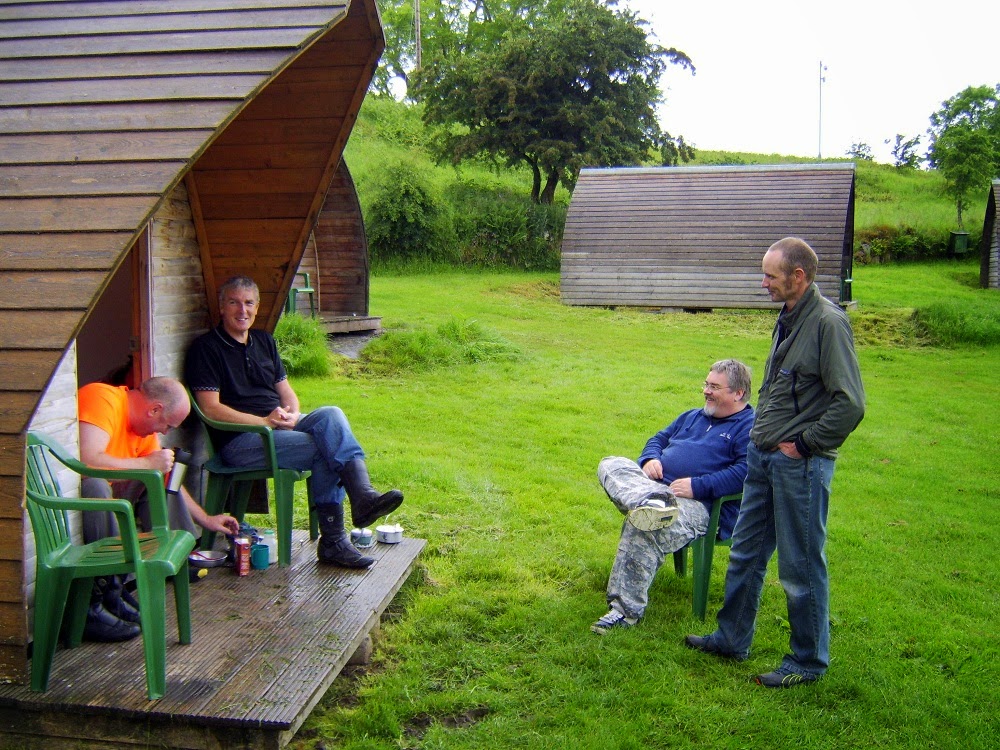 Since then things have been fairly quiet and I haven't been to any bike events other than the Ayr Bike Show. In fact, I've hardly ridden my bikes at all, but hope to remedy that in the new year.

My personal life hasn't really moved on much either. I've been out on a couple of dates, and I now know that it's not too much of a trauma for me! After over 20 years it's still all a bit strange, but I know I can cope with it should the opportunity arise.

So, I end 2014 in a job, on my own, and a bit short of money – at least things are getting better!
Now I've got a full time job I can start planning more. I've decided to sell two of my bikes, the Yamaha SZR 660 and my 'spare' Skorpion Traveller. I bought the SZR as a non running 'project', and now have it running, cleaned up a bit (it had been abandoned in a shed for 4 years), and the bodywork has been repaired and resprayed. 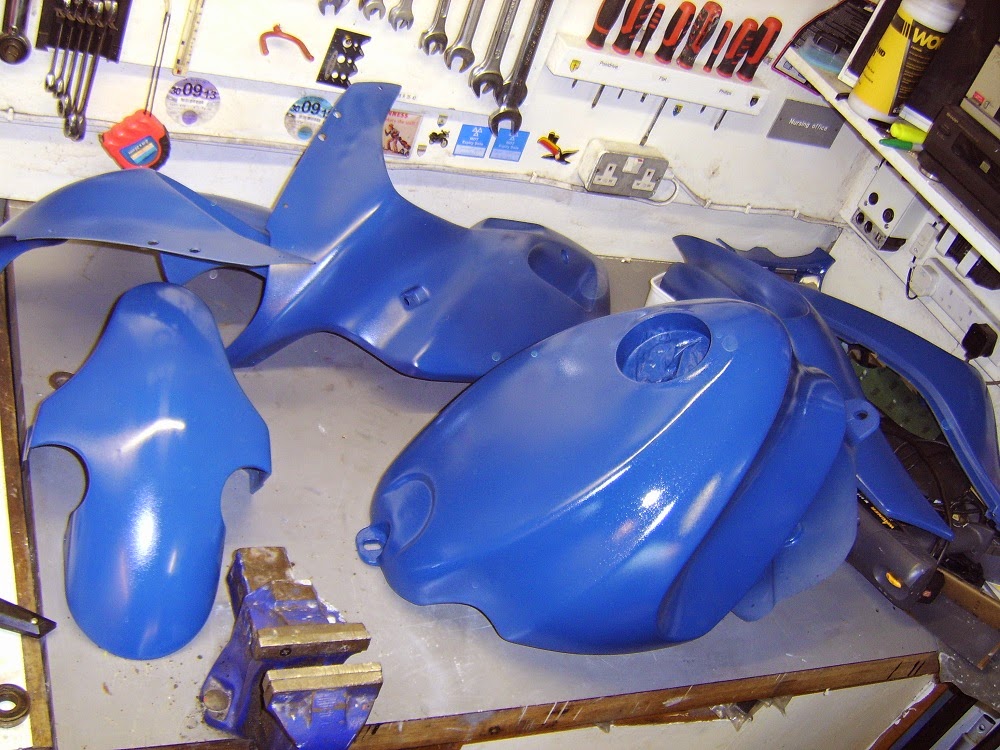 I should have this back on the road soon and it'll be for sale as soon as the weather improves. It's not really my kind of bike, and I think at my age that I couldn't ride it very far with handlebars that low! 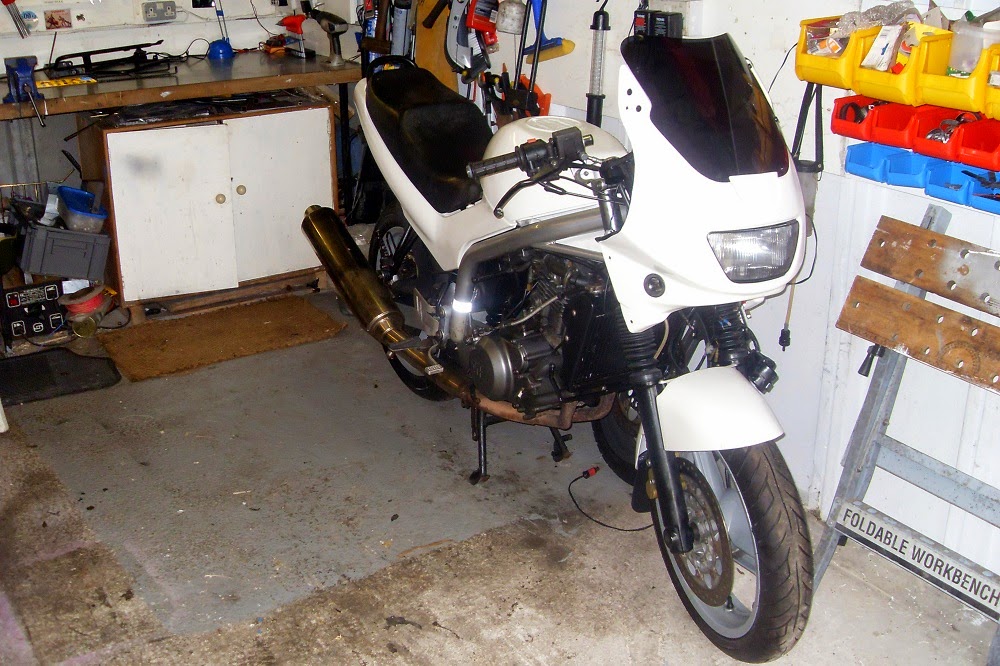 
The 'spare' Traveller has been tidied up, resprayed, and it pretty well ready to go once the weather improves and the 'selling season' starts. I'd only kept it case I got a job for which I needed a commuting bike, so is now surplus.

This leaves me my 'main' Traveller and my Honda CL 350. The Traveller is pretty well as I want it other than fitting higher bars (didn't I say that last year and the year before?) At time of writing the fairing is off to allow me to route the cables for the higher bars, so I should have that done fairly soon. Only other thing it could do with is having the petrol tank resprayed as it has bubbled up and flaked since the introduction of alcohol in petrol, but that can wait until I can afford it. 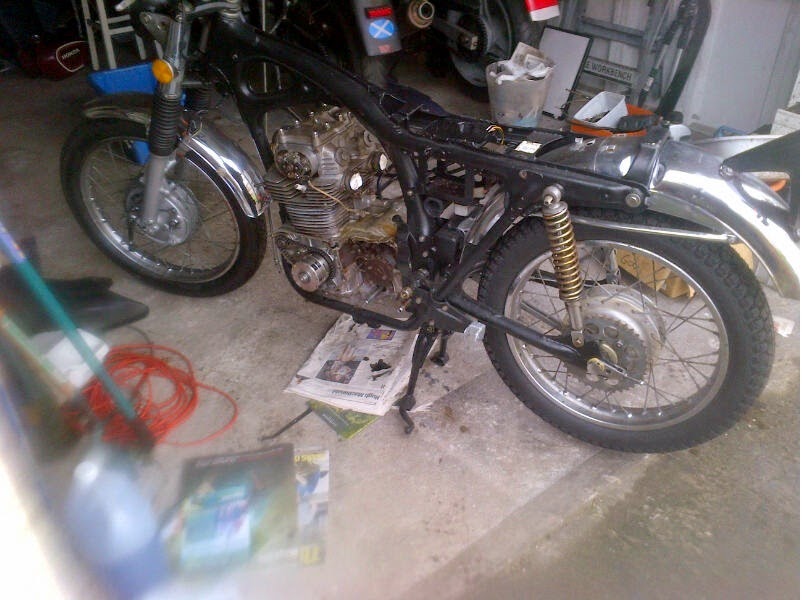 The CL has now got its engine in and it's just a process of reassembling it. Once the other bikes are sold I'll have enough money to buy some rear shocks and get it resprayed, then it'll be the process of getting it registered.

So that's my look at last year and the year to come. 2015 will probably be a bit of a 'fallow year' as well, but I'm a lot more positive that I was this time last year and things are looking up. Watch this space!