Back to the garage!

I've been experiencing a strange 'clicking' sound from the rear wheel when wheeling the Skorpion out of the garage, but wasn't able to work out what it was. Later, I started to hear a 'scraping' sound at low speed (at higher speed the sound was probably lost in the wind noise). At first I thought the 'scraping' sound might have been the brakepads, I replaced them, but the noise continued.
I went for a run today to test the bike and the scraping sound was getting louder, so I took the back wheel out to investigate. When I removed the sprocket carrier I put my finger into the centre and spun it and it felt very rough as if a bearing had broken up. I have a spare sprocket carrier, so fitted it and the 'clicking' noise had disappeared and the bike rolled more easily. The weather had got considerably worse (wind and rain), so I didn't have a chance to ride the bike, but I took the sprocket carrier apart and look what I found! 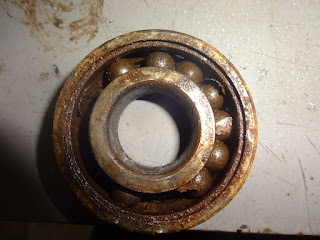 This is the outer bearing (part no: 18 in the diagram). The inner bearing was OK, but had signs of rust, so water had got inside. 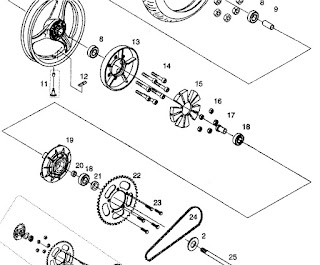 I've had this bike for over 15 years and this is the first time I've had problems with these bearings. They're a standard bearing available from bearing suppliers, so I'll replace them both.
Worth checking if you're planning any long summer trips.

I'd just finished writing this post when I checked what bearings I needed to order. Realised that they were 6204 - I'd ordered a pair of these by mistake when I'd meant to order 6203 bearings for a wheel! 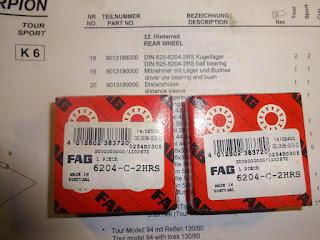 A few years ago I featured the French built Majestic as my Friday bike. 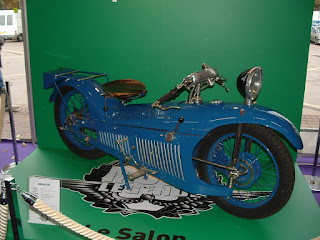 It looks like the 'look' has been revisited by the Austrian built Johammer J1. 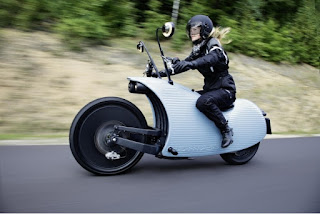 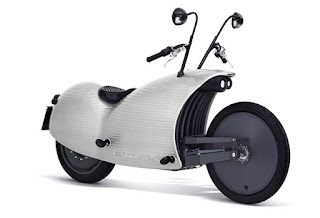 Can't imagine we'll see that many at that price! Love the groovy mirrors!

Sorry for being a bit quiet recently, but I've been very busy at work – worked 19 days in a row!

This week's Friday bike was one I saw for sale on Ebay but had never previously heard of. 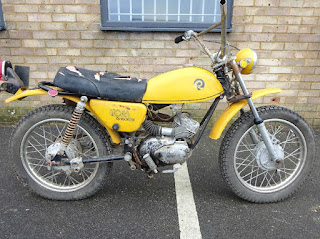 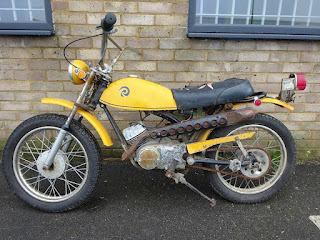 I searched online and found this article:

In addition to the more familiar tire manufacturer nowadays, Bridgestone started producing motor bikes starting in 1958. Motorcycle exports to America began in 1963, via Rockford Scooter Company of Rockford, Illinois (later renamed to Rockford Motors). While production and profits were doing well, the motorcycle production was more of a sideline to the tire manufacturing. Profits earned didn’t stay within the division, but were absorbed by the tire division. Unconfirmed rumors spread that other Japanese motorcycle manufacturers made it clear to Bridgestone that if they pursued their competitive behavior in motorcycles they would find themselves with no OEM market for their tires.
It soon became apparent that corporate interest in continued motorcycle development was waning. Late sixties “new” models were merely warmed over variations of earlier ones. Dealerships began bailing out and Bridgestone closed the motorcycle division. When Bridgestone stopped motorcycle production in 1969, Rockford Motors purchased the rights to the Bridgestone 60 & 100 motors and went to the Japanese company Tanaka Koyogo, LTD., and formed a partnership to supply Rockford Motors with a 100 c.c. Enduro model known as the Taka and two 60 c.c. mini bike models known as the Tora & Chibi. The partnership agreement allowed Rockford Motors the exclusivve rights for the United States market and Tanaka the exclusive rights to the Asian market, with the Tanaka line up marketed as the brand name of TAS Motors. The partnership ended in 1975 when Rockford Motors ceased business 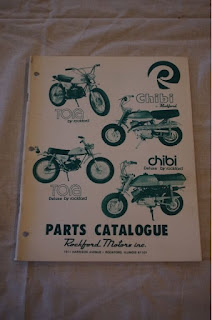 And here's one running!

A bike we should be seeing later this year: 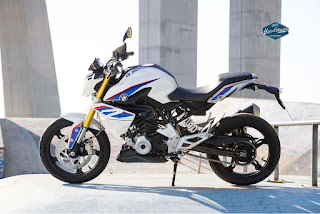 
A surprising bike from BMW being of such small capacity, their smallest bike since the R27 of the early/mid 60s. Built in partnership with Indian firm TWS, the G310R has a 313cc single cylinder engine with its cylinder angled back and a rear exiting exhaust. Will be interesting to see how it compares with models from Japanese and other European manufacturers. 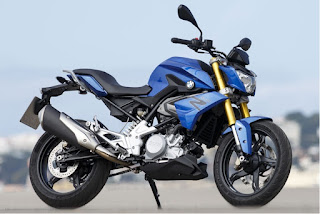 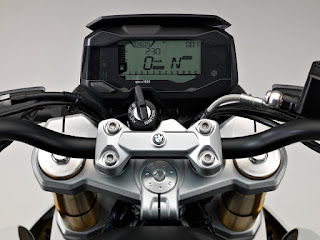 How it compares with similar bikes on the Indian market:

Starting with work, I managed to have had three fulltime jobs this year! The first was the job I'd started in January 2014, servicing and maintaining medical equipment in people's homes. It wasn't a bad job and I had a very good group of workmates, but it was a bit poorly paid and the work wasn't really challenging enough.
In April I got a job with another firm as a Calibration Engineer, travelling around calibrating and servicing medical and dental equipment. Or so I thought! Basically I applied for one job and was given another. I ended up working for a 'company within a company' doing less technical work and driving a lot more than I had been let to believe. I was given some vague promises that I would be transferred to the job I had applied for, but nothing seemed to happen. A colleague based in Newcastle left and I ended up covering his area in addition to mine. This led to long drives to and from jobs, a lot of time staying away from home, and it just wore me out. With travelling and work I was doing 12 – 14 hour days, and in August I drove 4917 miles (7913 km). I decided 'enough was enough' and looked for another job.
Job 3 was as an Equipment Support Engineer with a bioscience company, calibrating and maintaining laboratory equipment. This is based at their site in Glasgow, so no more driving all over the country! This is the first job I've had for 15 years where I've been base at one place, have my own desk, a tearoom, regular workmates, and commute to and from each day. I started in October and am enjoying the work. One drawback of having had three jobs is that I didn't manage to accrue many holidays, and up to Christmas had only four days off – two for job interviews, one to get my works van and my car serviced, and one where I waited in for someone to come and measure my house for new doors, so I've had no actual holidays this year.

This leads me onto my bikes, and not having any holidays, and being worn out most of the summer with Job no. 2, means that I've hardly ridden them. I've only been to one bike event, Easter Egg Run, and the occasional weekend run. Since I started my current job I've been commuting most of the time on my silver Traveller, but the very windy weather recently has meant it has been a bit too hazardous and I've had to use my car.
State of my bikes at the moment:

Silver Traveller. Currently being used for commuting and running well. When I get by white Traveller on the road I'll keep this as my 'holidays and runs' bike. I might get the petrol tank resprayed as since ethanol has been added to petrol the paint has started to flake around the filler cap. 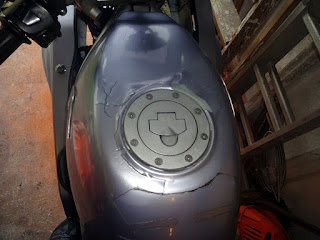 White Traveller. Have done a bit of work on it, mostly painting and tidying up scruffy bits. As this is going to be used for commuting (15 miles (25 km) each way, mixture of motorway and town traffic), I've added heated grips, extra lights, louder horns, etc. It's already in lowered gearing and I'll fit higher bars. Have worked out that it should last me until I retire. 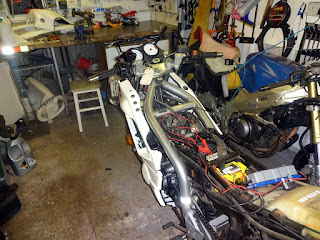 Yamaha SZR 660. Did quite a bit of restoration work on it and it's getting on well. Hope to finish it by the Spring and sell it.

Honda CL 350. Have done no work at all on it in the last year other than buying a pair of rear shocks.

My plan for this year is to have the white Traveller for commuting, the silver one for holidays, and the Honda as a hobby.

As for my private life, not much to report. I started going to a yoga class in about May or June and I think it's done me a lot of good. I'd been troubled by stiffness and pain in my upper back and neck, but this has gone since starting the class. I've also been sleeping a lot better and feeling 'looser', so that's helped a bit.
Have only been out a few times – a couple of concerts, a comedy night, and couple of meals. No dates last year, might manage one this year with a bit of luck! 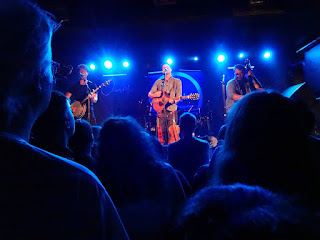 As for plans for 2016, looking back at previous ones I rarely mange any on the things I plan! Hopefully I'll get more of the bikes on the road and ride them more. In my current job I get 6 weeks holidays, and I'm planning a trip to France (more later) as well as more rides locally.
Socially, I'm going to try and go out more and you never know, I might find someone to go on a date with! 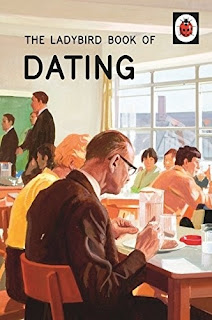 My sister got me this for Christmas!