On Sunday I went to the Scottish Classic Motorcycle Club Autumn Gathering at the Tullybannocher Café near Comrie in Perthshire. I've not been to a bike event for a long time and hadn't ridden the Triumph for weeks (I've been using the Suzuki for work each day) and had neglected it a bit. So much that the battery was completely flat and the warning lights wouldn't come on.

I'd bought an 'emergency starter', basically a lithium battery with leads attached, and started the bike using it. The makers claim that this will start a 2.5 litre car, so had no problem starting the Triumph. 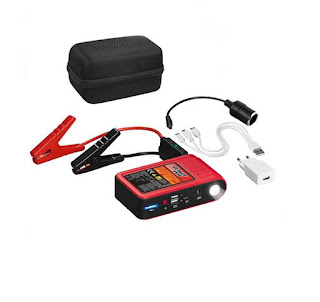 I was very low on petrol, so rode to the  local service station to fill up and had to use the starter again. It was raining and misty so I headed to Comrie by the 'main road route' taking the M8 motorway to Glasgow then the M80 past Stirling. There was very heavy rain through Glasgow, but the weather had brightened up by the time I got to the Tullybannocher Café.

There was a good selection of classic bikes already there and others arrive whilst I wandered round the car park. Good to see all the bikes were ridden there, too many bikes turn up in vans or on trailers at shows. While I was there I met my brother Stuart plus a few friends including a couple I knew from my time in the Triumph Owners' Club. I took numerous photos and this video of a look round the carpark.

Of particular interest were no fewer than four old Indians, particularly rare and they left together with a Nimbus and a Triumph.

When I went to leave the battery was still too flat to start the bike so it was out with the starter again. I headed west to wards Lochearnhead then south towards Callandar. At Kilmahog I turned right to take the Duke's Pass to Aberfoyle. This is a good winding road with spectacular views, but half of it has recently been resurfaced leaving it covered in gravel. After that it was a fairly straightforward ride home. Total distance was about 140miles/225km, 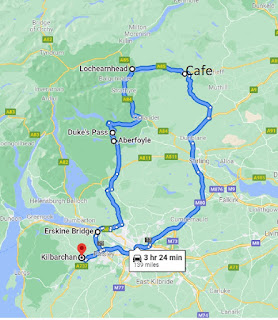 About an hour after I got home I tried starting it and it managed OK. However, I tried again tonight (Thursday) and the solenoid just clicked - looks like a faulty battery!

Some photos from the Gathering - more at my Flickr page. 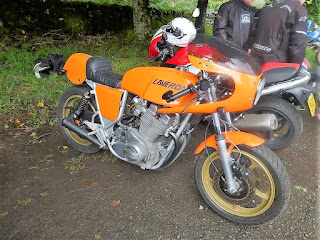 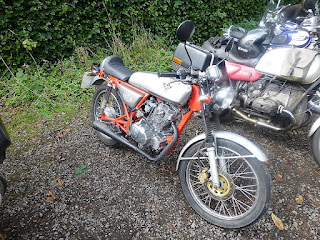 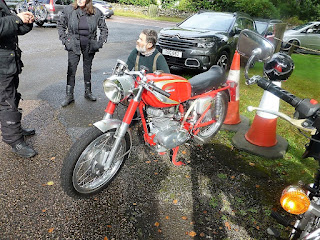 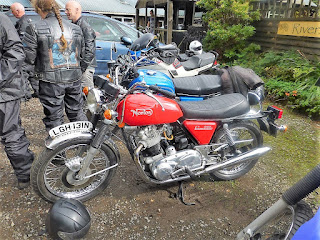 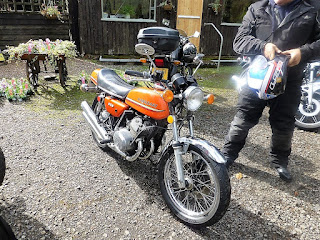 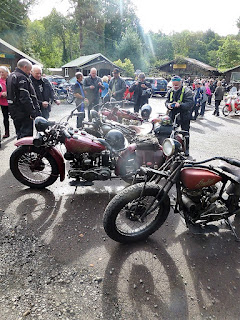