Sorry for not posting for a while, but I was waiting to see how some things worked out.


Posting a 'plans' post is always a bit tricky as things change, don't work out, other things come along, etc – perhaps 'hopes' or 'aspirations' would be better words!


2018 is going to be a year of changes for me – I'm 60 in April and don't like my job, so have decided to leave my job just after my birthday and follow one of two 'plans'.


Plan A is to find another job and work for another 2 or 3 years before retiring. I get my work pension at 65 and my State Pension at 66, so should be able to save enough to live on after a few years. Have been looking around for another job, but no luck yet. Although it's technically illegal to discriminate on grounds of age, we all know it goes on and I've had the 'you did your qualifications a long time ago' comment from one employer. I'll keep looking to see if I can get anything, and could those who know what I do let me know if they see anything.


Plan B is to sell my house, move somewhere cheaper, and retire and live off the money I make. I've made the calculations and it should be possible – just have to do some work to make my house ready for sale!


Either way I'll let you know as things progress.


If I do retire, or get a job where the scooter is not suitable for commuting, it'll be for sale so if anyone is interested, let me know. 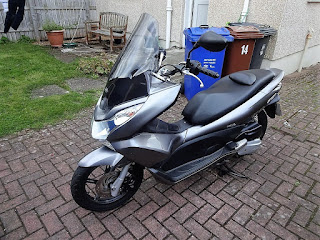 I've previously mentioned that I'll be selling my Yamaha SZR660 when the weather improves, so that will be me down to the Bonneville and the Honda CL350 'project'. If I retire I'll have no excuse for not getting it finished!


Back in November 2016 I went on a work trip to France to see a piece of equipment that was being built for my company. I've to return at the end of this month to see a similar piece of equipment that's being built for my company's new plant in Singapore. Unlike the last trip, this time we'll be flying from Glasgow Airport (5 miles/8km from my house), travelling by hire car rather than public transport, and spending a night in Paris before driving to Vendôme. I'm the only one of our group who can drive the hire car, and our hotel is about 50 metres from the Arc de Triomphe, so I've got this to look forward to!


I'm planning on going to Spain this year and have started Spanish lessons in the next village to me. These are being held in a pub as there's not really anywhere else to hold them. It's a fairly straightforward conversational class, so hopefully I'll be able to pick enough up to get by.


I've a couple of ideas of places to go, so it'll be a case of working out a route taking them in. More later, but my friend Maureen lives near Madrid, my friend Jane will be moving to Murcia, I've always wanted to go to Barcelona, and I found this bike event in Northern Spain,

so I could work out a route taking them in. Also, there's a ferry service starting from Cork in Ireland to Santander, so that's another 'possible'. If I go to all the places in Spain I've mentioned, this is the approx route. 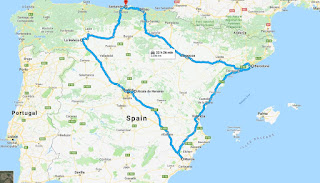 Obviously, this is just at the planning stage and some, none or all of the above might happen! If anyone has any suggestions of places I could go to, please comment below.


Another plan I have is to go to a music festival. I've never been to one, so was looking about for one that I thought I would enjoy. This one looks like having the best line-up, and being near the South Coast, could be taken in as part of my Spain trip.

Other than that, my 'aspirations' for this year are the usual stuff: go out on the bike more, go to more concerts, lose weight, get fitter.............. and who knows, I might even go on a date! (Although that's probably wishful thinking on my part!)