How cool are this range of electric bikes from Juicer? 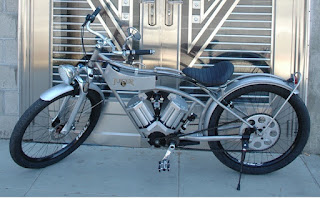 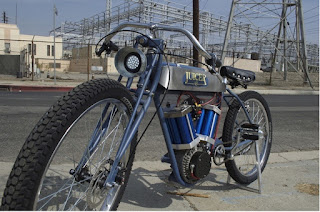 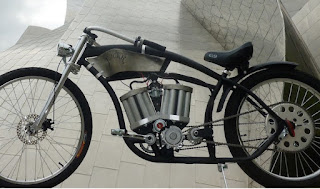 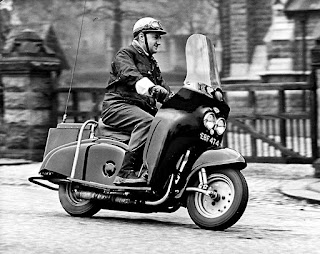 Now here's a rarity - the DMW Deemster. Launched in 1962, the Deemster was an attempt by British firm DMW to break into the Ariel Leader/Velocette Vogue 'enclosed small tourer' market. 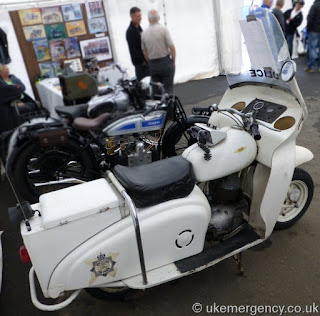 A strange motorcycle/scooter hybrid, it was powered by a Villiers 250cc two stroke twin engine, and had 12 inch wheels and leading link forks. A sales failure, it was bought by a number of Police forces. 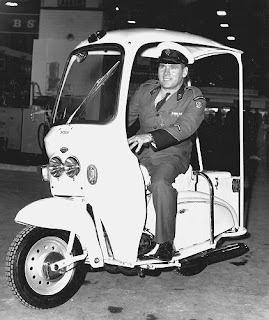 Fully enclosed version carrying an AA patrolman - looks like an early version of the BMW C1! 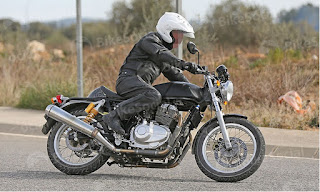 This week's Friday bike is one you can't buy yet. A twin cylinder prototype Royal Enfield has been spotted being roadtested. 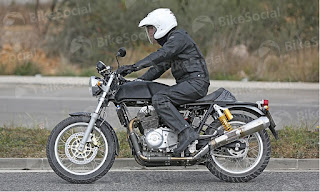 No details yet other than it's believed to be around 750cc and will be launched in India in 2017 and Europe (and possibly other countries) in 2018.

The prototype uses a modified frame and running gear from one of RE's existing singles, and the cylinder head looks similar to the OHC Himalayan single they showed some time ago - possibly that engine 'doubled up'?

Also in the news, another Indian firm, car/truck/tractor manufacturer Mahindra has purchased the rights to the BSA and Jawa brands. They released they following staement: (stolen from here.)

New BSAs could be built in Britain within the next two years, according to Rajesh Jejurikar, President and Chief Executive of Mahindra's Farm Equipment and Two Wheeler division.
Following last week's news that the Indian giant has bought the rights to the BSA name from British company BSA-Regal, Jejurikar told BikeSocial that plans are underway to design, develop and manufacture the first new models to bear the BSA name since 1999 in the UK, with the first models optimistically slated for a 2019 release.
BSA, which stands for ‘Birmingham Small Arms’ has been bought by Classic Legends, a subsidiary of Mahindra, and bosses at the Indian company have identified that they are looking to identify ‘BSA stylists’ and that they want to design, engineer and hopefully build the bike in the Midlands.
Jejurikar stated that they were keen that the new bikes be "produced in the UK, close to the place of origin" although he could not rule out that the production line would be at the Mahindra-owned Peugeot Scooters factory in France, stating that the project was still in a very early stage and that no major decisions had been made.
Likewise, no decision has been made on what kind of bikes the new BSA concern will be manufacturing, however Jejurikar added that the plan was to remain true to the traditional BSAs, with suggestions that a 500-750cc single will most likely be the new company’s first model.
While the massive Mahindra organisation provides the money behind the project, the Indian giant is keen that BSA remains its own brand, however the parent company does have an impressive roster of companies that can help get BSA back into production if need be, not least the aforementioned production and distribution facilities of Peugeot, the Mahindra Moto3 race team development centre in Italy and the Pininfarina design house famous for styling some of the world’s most iconic supercars.
The investment from Mahindra promises to be a major shot in the arm for the British motorcycle industry, potentially in the same way that another Indian giant, Tata Motors, has transformed the Jaguar Land Rover group.
Jejurikar added: “India is unique and the only other nation capable of truly understanding the classic British motorcycle. Through the British Raj we had a lot of British bikes sold in our country and many learned to ride on classic British bikes. We are keen for the bikes to be produced in Britain, that is our endeavour, and we want the new BSA to represent the honest engineering for which British bikes are so renowned.”
Ironically, despite the Indian investment, it is unlikely that any new BSAs will be sold in the parent company’s homeland. Mahindra state categorically that the BSA models are being designed for the ‘developed world’ with a key focus on North America and Europe. There is also an ongoing legal battle regarding the use of the BSA name in India that may preclude the new Mahindra owned company from being sold under the trademark in the country anyway, although Classic Legends has also purchased a licence to the historic Czech brand JAWA, which will be applied to a range of products for the Indian market.