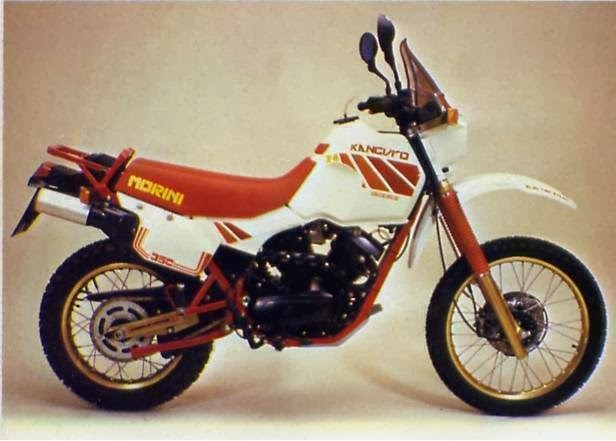 
This week's 'Friday bike' is one that I came very close to buying, the Moto Morini 350 Kanguro X3.
This was one of the last trail bikes Morini built using their 350cc V twin engine. (There was also a 500cc 'Camel' version).
Back in about 1990 or 91 (can't remember now), I had to go to UMIST (University of Manchester Institute of Science and Technology) for an Open University summer school. I rode down on my MZ ETZ 250, and things went well until I tried to change down a gear and found that the lever had fallen off! This was not an uncommon problem on MZ 250s due to the poorly machined splines on shaft and lever. (I had it happen twice, and some MZ owners used to attach a loop of wire round the lever to catch it if it came adrift).
What to do? I had planned on keeping riding in top gear until I got off the motorway, then stopping and change the bike down into 2nd using Mole grips (Vise grips), and riding through Manchester to the University. As I would be there for a week, I could phone my brother and get him to post me down another lever from my other 250. This would have worked had I not had to stop for fuel. After filling up I started the bike and put it onto 4th gear on its stand, then holding the clutch in I started to run with the bike aiming to leap on, slipping the clutch, like racers did in the 60s. This didn't quite work out as as soon as I got the clutch fully out and was riding onto the motorway, the clutch started slipping badly!
MZ 250s' clutches are fitted onto the end of the crankshaft by being pressed onto a taper - no splines, no keyway - nothing! This means that if it's given any sort of abuse, it slips off the taper and you don't have any drive. If you're really unlucky, it scores the taper so you end up needing a new crankshaft and clutch centre. It is possibly the worse piece of design I've ever seen and it's no wonder I've never come across any other bike with the same setup.
So it was onto the phone to the breakdown people and they took me to the next service station. There the people who own the garage with the breakdown trucks let me leave the bike inside until I could collect it, and I arranged with the breakdown people to relay me and the bike home the following week after the summer school.
I was still about 50 miles (80 km) from Manchester, so carrying my panniers, I got a taxi to the nearest railway station, then a train to Manchester.
I was really annoyed with the MZ and its stupid clutch design, and one evening I was walking past a bike shop where they were selling Morini Kanguros for £1200. It was heavily discounted as the model had been dropped from the range, and was a real bargain as an MZ ETZ 250 was about £1000 and a similar Japanese bike at least £2000.
Next day I went into the shop and asked if I could buy a Kanguro using my credit card! They said they could have the bike ready for me to ride away the following Saturday (when I was going home), then I asked if they could fit a set of Krauser pannier frames to it so I could carry my panniers. They looked in the Krauser catalogue, but no fitting kit was listed for the Kanguro. I offered to pay them to make a fitting kit - I'd made a fitting kit for the MZ, all it needed was four stips of steel bent and drilled to suit, a couple of hours work at the most, but they weren't interested. When I said that I'd only buy the bike if they could fit the pannier frames, and I was willing to pay them to do it, they still wouldn't budge, so I didn't buy the Morini!
My plan had been to ride back to where the MZ was on the Morini and tell the people looking after it to throw it in a skip! I was so disappointed with it that I didn't even want it back.
In the end I got a train, taxi, and breakdown truck and got home at about 2 in the morning. I fitted a new gear lever and rode the bike for a least the next 10 years!
A couple of years ago when I was looking for a project, I started looking around for a Kanguro. All the ones I could find were either wrecks or ridiculously over priced (or even both!). So I ended up buying my CL350 instead.
I've often wondered what a Kanguro would have been like. As it is, I've still not owned an Italian bike (my Italian built Yamaha doesn't count), and my CL 350 is the nearest to a trail bike I've ever had. Anyone out got or have ridden a Kanguro? 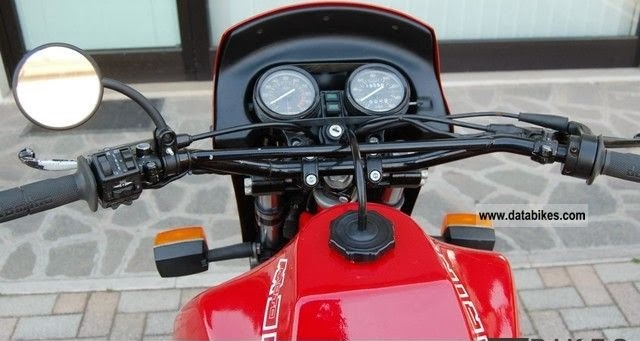 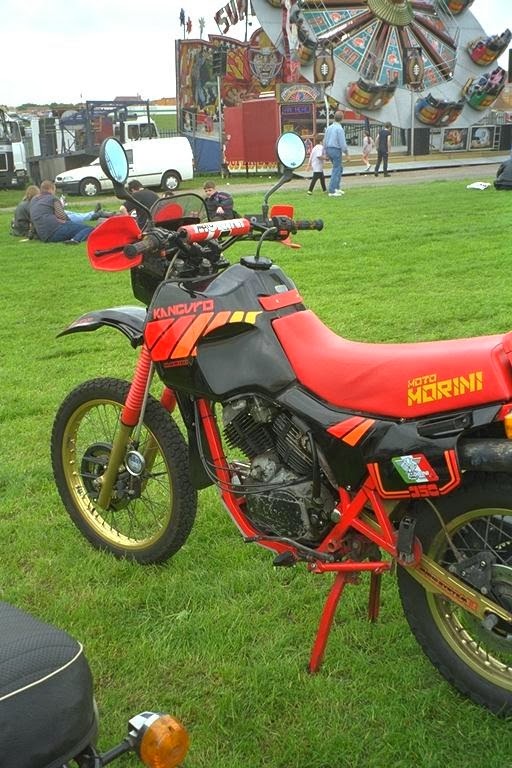