I've been riding bikes for over 40 years but sometimes come across a brand I've never heard of before. Saw this rare British built bike on Ebay. 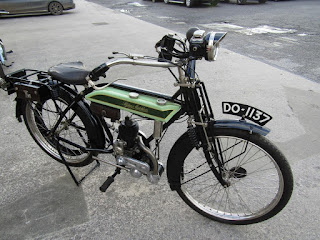 Alldays and Onions were a Birmingham based engineering firm who (amongst other things) built bicycles, then motorcycles, and later cars. Motorcycle production ran from 1905 under the 'Alldays Matchless' name, but after 1915 used the 'Allon' name to avoid confusion with the other Matchless brand. This continued until 1927, when they merged the motorcycle production with the Enfield brand that they also owned. 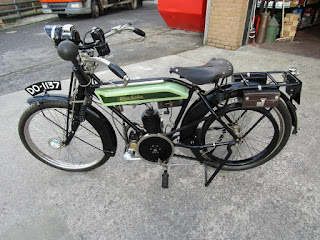 This particular bike has a 269cc Mk 1 Villiers engine, believed to be the oldest surviving example in existence. It has no gearbox and has clutchless direct drive, which must make it fun through traffic!  Lighting is by carbide gas lamps - none of the new fangled electricity here! It won't catch on, you know!
I just love the look of this bike, it just oozes charm and is a proper 'gentleman's motorbicycle'