Mr combo's recent post reminded me of a bike that I saw many years ago. Indian are one of those brands that have a mysterious and 'cool' image (certainly cooler than 'a certain other, more successful US manufacturer'). However, this usually only applied to the 'original' Indians built before 1953. After that, the Indian name was used on a variety of motorcycles, some good, some not so..... There's a short history here.
The bike I'm going to feature is from 1971-76 when the Indian name was owned by one Alan Newman, who used the badge on a range of Taiwanese built 2 strokes. These were from 50 – 175cc and used a selection of engines from Hodaka, Italjet (Morini), Fuji, and Minarelli. The one I saw was a 175 (I think), and was outside John George Motorcycles in Glasgow (remember them?) Only things I remember about it were – the cool tank badge, the fact that it was an 'Indian', the fact that it was also brown (a brown motorcycle?), and that it was unusually loud. It also looked very cheaply made! Only one I ever saw, and the only time I'd hear of one in the UK.
I looked round the Web and this is similar to the bike I saw: 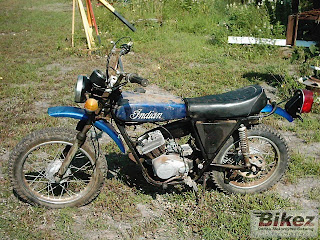 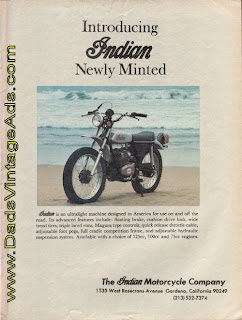 Needless to say, I didn't see any of these 'Indians' at the Indian Rally I was at a few years ago. pics