A day in the garage

Decided to spent today doing some 'proper' work on the CL 350. After all, it's only a year since I bought it, so it was about time I started especially as I intend going to Spain on it in October!
During the week I found something that I would never have imagined I could ever find - a luggage rack. Listed on Ebay by the company I bought my bike from, and mine for only £26. 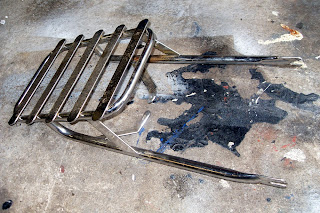 OK, it's a bit rusty and scuffed on top (but nothing that won't polish out), but bear in mind that the CL ceased production in 1973 and was never sold in Europe, so this was an unexpected find. The 'slats' on top show that it was made for the US market (British ones tend to use tubes), and it fits very neatly. 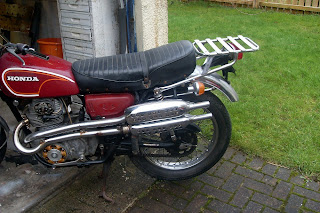 It's also very slim so doesn't spoil the narrow lines of the bike. 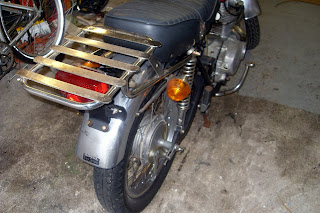 Last year I'd bought a 'tail pack' on Ebay. It seems to be an earlier version of this and fits neatly onto the rack. 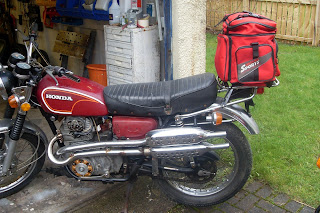 Unlike the newer version, the one I've got also has expanding side pockets. I got 5 t-shirts into one to show how big they are. 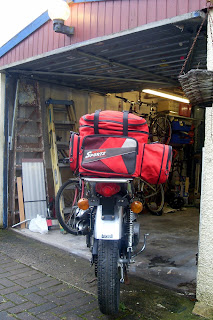 This should give me enough luggage capacity for a week in Spain, but I'll probably take a small rucksack as well to carry my overnight things on the ferry (saves carrying the tailpack up from the car deck) and it'll be handy for day to day running about. The new version of the pack costs £99.99, the one I bought, listed as 'used' but had clearly never been on a bike, was only £19.99 - there's bargains out there if you keep your eyes open!

I started stripping the bike down and was surprised how good condition the bike was in and how easily the nuts and bolts came apart. 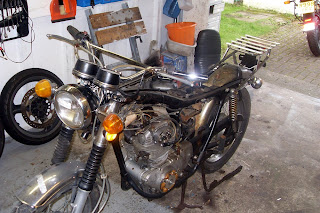 Only problem I had was that the screws holding on the sprocket cover were well chewed. 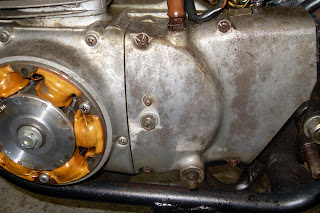 I drilled the heads off and there was enough length of the bolts exposed that I could remove them with a Mole wrench. One was a bit tight (I thought it was going to snap), so I'll clean up the thread with a tap before reassembly.
It wasn't long until the engine was out. 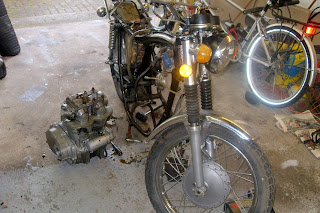 And up onto the bench. 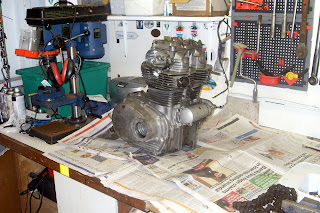 It was a bit heavier than I thought it would be, but I managed it - just! I'll turn it upside down and remove the lower crankcase half to repair the broken kick start mechanism and clean out any gunge I find.
Next job was to take both wheels off to check the condition of the brake shoes. Front came off easily enough, the shoes looked new, so I reassembled with plenty of grease and Copaslip.
The rear was a bit more difficult and the spindle had to be persuaded by Mr. Hammer to come out. When I took the brake plate out of the wheel, the friction material from one shoe fell onto the floor! 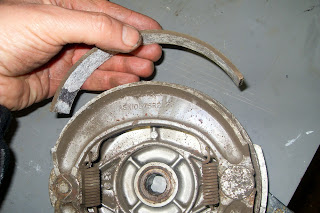 I'd seen this a few times before on MZ 2 strokes (and even have it happen on a bike whilst I was riding it!), but never on a Japanese bike. However, the CL is 41 years old and the shoes didn't have a Honda logo on them, so could have been pattern parts. Something else for the shopping list!
Other than that, I just sprayed all the nuts and bolts I could find with WD-40, to loosen them for next time I'm working on the bike. I'm really pleased how much I got done, and how easy it all was. Let's hope I don't too many 'nasties' when I open the engine!
To round off the day, I made an interesting discovery. When I took the saddle off I noticed it had a compartment that once held the owner's handbook. It was very stiff, but I manged to get it off without breaking the clip, and found this inside. 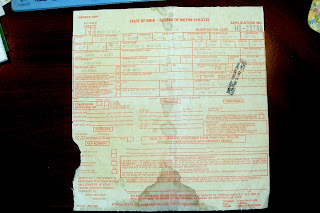 A registration document from 1991 for an owner in Delphos, Ohio! What a find! That will go into the CL's folder of documents, and might make registering it here easier.