A bit late again, but this one's got an important place in history. 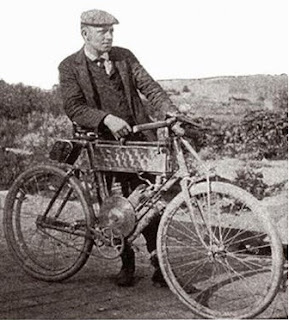 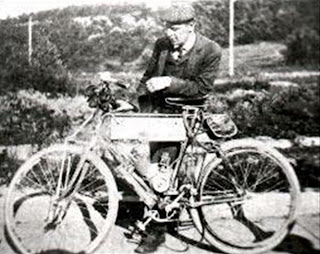 This is George A. Wyman, who in 1902 rode his Californian Motorcycle Company bike coast to coast across the US, the first person to make the journey on a motor vehicle. As you can see from the Wikipedia entry, this was a far from easy journey due to the lack of roads, mechanical breakdowns, and frequent pedalling with a dead engine. Even buying fuel must have been difficult during an era when motor vehicles were still rare.

Wyman used his 1902 California machine for his crossing of the United States. The California had a 200 cc (12 cu in), 1.5 hp (1.1 kW) four-stroke engine attached to an ordinary diamond-frame bicycle.[5][6][7] Wyman's machine was equipped with 28 x 1.5 in. tires, wooden rims, a leading-link front suspension fork, a Garford spring saddle, a Duck Brake Company front roller brake, and a 1902-patent Atherton rear coaster brake.[8][9][10] A leather belt-drive with a spring-loaded idler pulley directly connected the engine output shaft to the rear wheel.[11] Using a standard steel bicycle frame, the California weighed approximately 70–80 pounds (32–36 kg) without rider, and was capable of approximately 25 mph (40 km/h) using the 30-octane gasoline of the day, with a range of 75-100 miles.[12][13] Throttle control was not yet perfected, and engine revolutions were mainly controlled by means of a spark timing mechanism.[14] The wick-type carburetor was crude, consisting of a metal box with internal baffles stuffed with cotton batting.[15] With no float chamber, the rider had to open the gasoline tap periodically to admit fuel into the carburetor.
For such a long trip, Wyman carried a remarkably small amount of gear. A set of warm clothing, money, water bottle, cans for spare oil and gasoline, a Kodak Vest Pocket camera, a cyclometer, various bicycle tools and spare parts, and a long-barreled .38 Smith & Wesson revolver constituted his total luggage.
Wyman departed from Lotta's Fountain at the corner of Market and Kearny streets in San Francisco at 2:30 P.M on May 16, 1903.[16] He had previously agreed to keep a diary of his journey for later publication in The Motorcycle magazine, a periodical of the time. The first part of his trip took him across the Sierra Nevada, through the Nevada desert into Wyoming, then on through Nebraska to Illinois.
As the dirt trails and wagon tracks of the day were often impassible, Wyman rode the railroad tracks for over half of his journey. During the first part of his trip, he frequently slept in railroad company housing or at rooming houses located in division settlements (small municipalities founded by the railroad).[17] His motorbike suffered several breakdowns along the way, requiring him to make improvised repairs until he could get to a larger town to obtain new parts. As he neared Aurora, Illinois, his engine's crankshaft snapped, and after pedaling his way to Chicago, Wyman was forced to wait there five days for a new crank to arrive by railway express.[18]
After leaving Illinois, Wyman traversed the states of Indiana, Ohio, and Pennsylvania before entering New York State. Outside of Albany his engine lost all power, and he was required to pedal his heavy motorbike the remaining 150 miles to New York City using a cycle path reserved for licensed cyclists.[19]
On July 6, 1903, Wyman arrived in New York City, completing his transcontinental crossing and becoming the first person to cross the North American continent aboard a motor vehicle.[20] His journey took a total of fifty-one days to cover some 3,800 miles (6,100 km). Afterwards, Wyman’s motorbike was placed on display at the New York Motorcycle Club while Wyman recovered from his grueling journey. While in New York, Wyman was present for the inauguration of the very first nationwide motorcycle organization, the Federation of American Motorcyclists (FAM)[21] at the Kings County Wheelmens' Club in Brooklyn; it was reported at the time that his hands were still in bandages from the trip.[22] Wyman later returned to San Francisco by train. His California motorbike was put on display in San Francisco at Golden Gate Park for a special exhibition commemorating the trip.

In 2003 a group of enthusiasts built a replica of George's bike and recreated his ride. Website here.