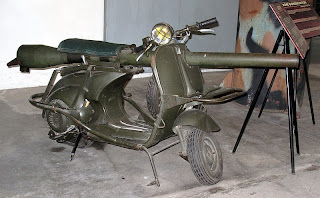 The Vespa 150 TAP is a Vespa scooter modified for use with paratroops (Troupes Aéro Portées, or TAP). Introduced in 1956 and updated in 1959, it was produced by Ateliers de Construction de Motocycles et Automobiles (ACMA), the licensed assembler of Vespas in France at the time.[1] Modifications from the civilian Vespa included a reinforced frame and a three inch recoilless rifle mounted to the scooter.[1][2]

The 150 TAP's mounted M20 75 mm recoilless rifle, a U.S.-made light anti-armour cannon, was very light in comparison to a standard 75 mm cannon but was still able to penetrate 100 mm of armour by HEAT warhead. The recoil is counteracted by venting propellant gases out the rear of the weapon which eliminated the need for a mechanical recoil system or heavy mounts, enabling the weapon to be fired from the Vespa frame.
The scooters would be parachute-dropped in pairs, accompanied by a two-man team. The gun was carried on one scooter, while the ammunition was loaded on the other. Due to the lack of any kind of aiming devices the recoilless rifle was never designed to be fired from the scooter, the gun was mounted on a tripod which was also carried by the scooter, before being fired.
The "Bazooka Vespa" was relatively cheap: Vespas cost roughly US$500 at the time, and the M20s were plentiful. Roughly 800 of these scooters were deployed in the Algerian War.
From Wikipedia. 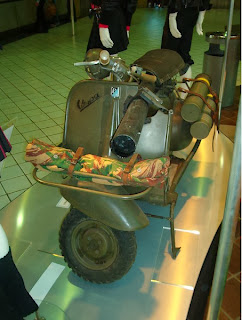