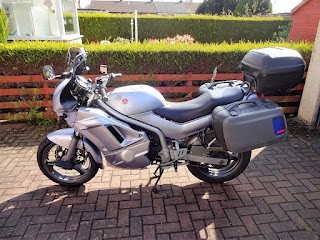 I bought this bike back in 2000 and since then it’s been my main touring/long runs bike. Over the years it’s been to France, Ireland, Germany, Czech Republic, Belgium, Netherlands and the Isle of Man.  When I was married it carried my wife and I (with 2 weeks’ worth of luggage) easily on our annual holiday. 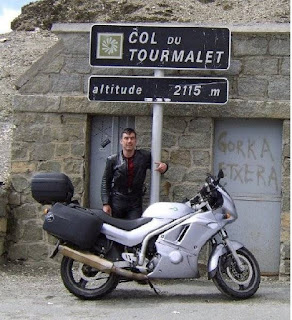 Early 2000s, back when I was slimmer and had black hair!

In the 41 years I’ve been riding, this is the bike I’ve had the longest, but with the purchase of my Bonneville, it’s time for us to part.
I’m open to offers; just bear in mind how many ‘extras’ it has on it. I don’t expect to get all my money back, but I expect to get more than an ‘average’ Skorpion.
Also, I’m not interested in any exchanges; I’ve got too many bikes as it is!
Bear in mind that I live about 15 miles (25 km) west of Glasgow. I live near Glasgow Airport, so you could fly here and ride it home (as the last buyer did!)
Bike is currently on SORN, so you’ll have to arrange to tax it or have it collected in a van/trailer. You could also use one of the bike courier companies.
If you want to view, I work roughly 8-5 Monday to Friday, any time outside of that should be OK.
Contact me on normanwade@supanet.com for more details 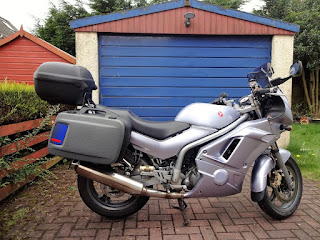 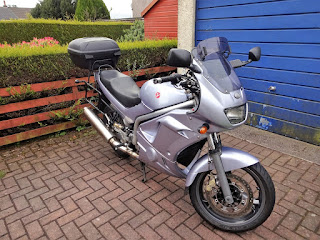 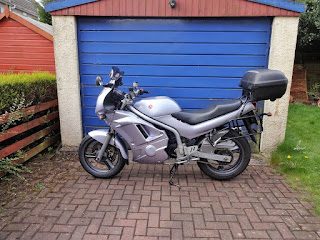 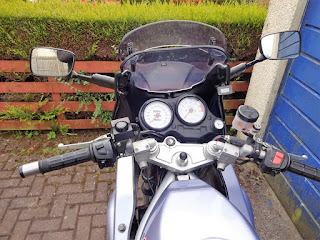 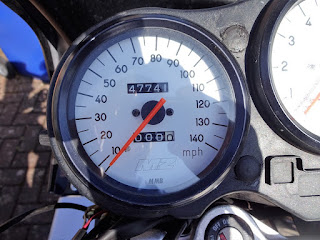 Current mileage: 48,000 miles (77,000 km). I’ve owned it since 17,000 miles and fully synthetic oil has been used at every service. Engine, carbs, airbox and exhaust system are completely standard and the engine has never been apart.
Wheels:  Powdercoated about 15 years ago and still looking OK. Avon RoadRider tyres.
Forks: Hagon springs and preload adjusters from a Honda VFR 750 modified to fit.
Rear Suspension: Öhlins remote reservoir unit from Yamaha FZR400, reservoir on homemade bracket.
Bodywork: Was white when I bought it but was resprayed Daihatsu ‘Purplish Silver’ in 2001. As paint had lifted around filler cap I had a spare tank sprayed to match last month. 3 x MZ mirror extenders, so I can actually see behind and not just my sleeves! Windscreen fitted with MRA adjustable extender.
Brakes: Brembo callipers, Brembo front master cylinder with adjustable span lever. Matching adjustable span clutch lever. Replacement stainless brake hoses.
Handlebars: Helibars modified to fit, 35mm rise over standard. Honda ST1100 heater grips with adjustable temp control.
Luggage: Hepco and Becker pannier frames and rear rack. (not the standard Traveller ones), H&B Journey 42 litre topbox. This hasn’t got the box to rack lock so is bolted on, lid lock works correctly. Pair of H&B Junior 40 litre panniers. These were sold through Honda dealers, so have grey lids. Don’t have keys for these, probably available from H&B or Honda dealers.
Other stuff: Yamaha TRX 850 headlight (much better than standard), LED rear light and LED rear/fog light in place of rear reflector, RAM satnav mount and wiring for satnav, output socket, gear lever linkage with Rose joints (much less slop), Scottoiler with touring reservoir and dual injector, Datatag (can be transferred to new owner), loads of stainless nuts and bolts.
As it has been well used, some of the bodywork is a bit scuffed and scratched, and there are some cracks around the mounting holes on the fairing and screen. This is a common problem on Skorpion due to the vibrations.
Bike will come with a year’s MOT.