Hello everyone! Sorry for being quiet for quite a while, but with the Covid-19 restrictions there's been very little to report on. Hopefully, the end is in sight and we'll be able to get out and about again.

One of the areas for improvement on the Triumph Bonneville T100 is the suspension. Like a lot of the bike this has been built down to a price and is fairly basic. I've put up with it for 4 years now, but decided it was time to do something about it.

The standard Triumph rear shocks are very poor, and when I bought mine a previous owner had replaced them with a pair of unknown make. These were just as bad as the standard shocks and I couldn't find a setting for the preload that wasn't either very harsh or bottomed out on bumps. They did have a Schrader type valve for adjusting internal pressure, but it had a non-standard thread so I couldn't find a pump to fit.

Also, the reservoirs got in the way when lifting the bike onto its stand and had I reversed them, they would foul on the Scottoiler. 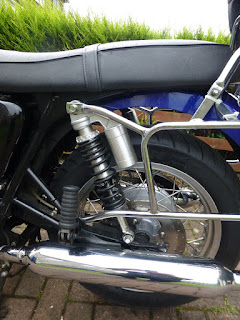 I had a look at what was on the market and kept on eye on Ebay for used shocks. Eventually, a used pair of Hagon shocks for a Bonneville came up and I managed to 'win' them for £53.

I've had Hagon shocks (and the Girlings they are based on) on a number of bikes in the past, so I knew they were reasonable quality. They are a straight bolt on, although they are very slightly longer. Not enough that it's noticeable when sitting on the bike, but when it's on its centrestand, both wheels touch the ground. 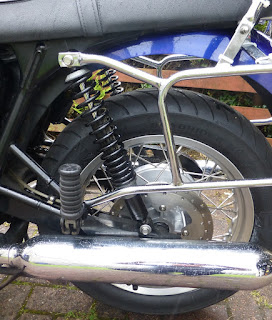 They made a huge improvement, the bike is more comfortable, absorbs shocks from the road better, and is much more stable through corners.

I listed the old shocks on Ebay and got £50 for them, so the upgrade only cost £3!

Turning now to the front, the forks were always a bit 'soggy' so I bought a pair of uprated springs from Hagon: Springs

I bought these about a year ago, but with lockdown I only got round to fitting them this morning.

Fitting is straightforward - remove front wheel and mudguard, remove fork, remove top nut and pour out oil, spacer, washer and spring. Once all the old oil had drained, pour in fresh oil, 'pump' the forks to expel air from the damper and compress forks checking air space above oil is as printed on the spring box. Fit new spring, washer, spacer and top nut and replace on bike. Repeat with second fork. 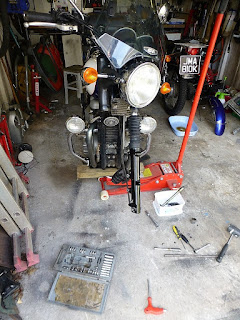 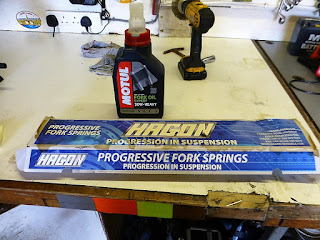 Noticeably, the Hagon spring is wound progressively - winding are closer at one end whereas the Triumph springs are constantly wound.

While I had the mudguard off, I cleaned the underside and gave it a coat of Waxoyl to stop it from rusting. I bought a 2.5 litre can of Waxoyl about 30 years ago and still have about 3/4 of it left! 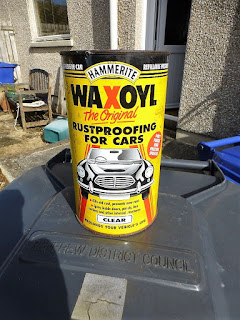 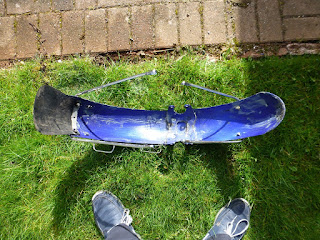 Just had to refit the mudguard and front wheel and the job was done. One thing I noticed - like my Honda Forza, a previous owner had coated the threads of any fasteners he had removed with anti seize copper grease, so everything came apart without any drama. Always worth doing!

I haven't yet had a chance to ride the bike, but will report back later.

Hagon shocks: Mine are the base model all black version, had I bought new ones I would have got the all stainless version. List

Waxoyl: I placed the tin in a pot of water and heated it on the stove to soften it enough that I could pour it into a jam jar and apply it with an old paint brush. I hardens quickly and should keep rust at bay. Probably not necessary, but I had it in the garage! Waxoyl