I've carried out a few more improvements to my Bonneville. Just small things that make the bike more useable and reliable.

First is upgrading all the lights to LED. These are more reliable (if you buy reasonable quality and not cheap unbranded lights from China on Ebay!), and draw less current. Most of the lights are a straight plug in, but you have to modify the wiring for the indicator warning light. 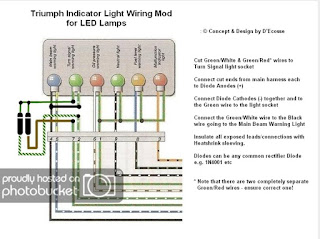 This is a bit fiddly as there's not much slack cable when you open up the dials. I had to replace the flasher unit with one suitable for LEDs, and that was the job done.

Whilst the dials were apart, I replaced the warning lights (except high beam), with LEDs.

These are much brighter than standard and can easily be seen in bright sunshine. So bright in fact that they would be too bright for the high beam warning, and would probably distract you at night, so a filament bulb is left in that.

Next was to replace the windscreen. The Givi windscreen I'd fitted was OK, but a bit small, the wind from it buffeted my head a bit, and I didn't like the way it wobbled about at speed. I had bought it cheaply on Ebay, so watched it case anything more suitable came up for sale. I eventually saw a screen made by Spanish firm Puig, and was lucky to get if fairly cheaply. Although it was listed as  'used', when it arrived the mounts were still in a bag with the instructions, so it looked like it had never been used.

Fitting was easy enough, and the new screen is slightly higher and sits at a more vertical angle, is wider, and is clear rather than tinted (which I prefer.) I went down to the coast for a run yesterday (first day that we in Scotland could travel outside our local are due to lockdown), and it was a great improvement. Less buffeting, more protection from the wind, and didn't wobble about. Old screen will be going back on Ebay soon! (May as well get some money back!) 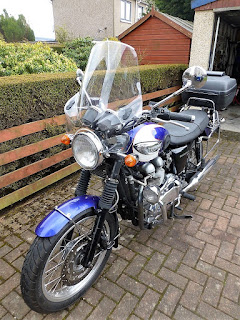 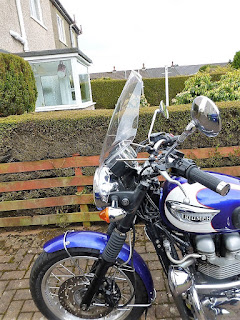 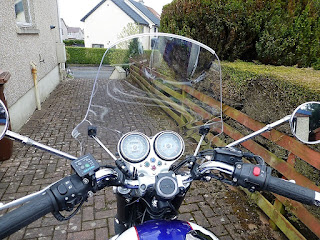 Screen I got is made for the Kawasaki ER-5: link

Next a couple of improvements I made a while ago. When we can travel again I intend doing some touring and days out on the bike. Sometimes it's handy to be able to strap a bag onto the back of the saddle but the problem can be, where to attach the straps or bungees? You can buy 'bungee mounts' that replace the bolts at the top of your shocks, but for a fraction of the cost I bought some cheap generic paddock stand bobbins with the right sized holes (8mm) 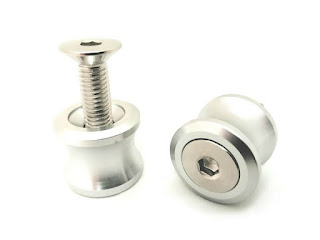 These bolted on in place of the shock top bolts and give a secure place to attach bungees. Cost about £5-6. 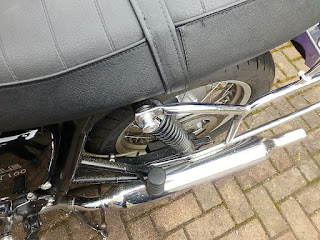 To give some more mounting points, I bought some stainless steel eyebolts with a 6mm thread. 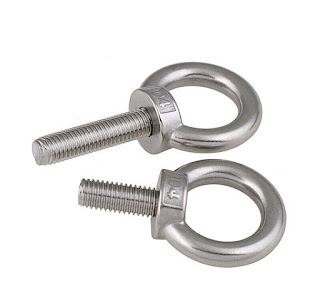 These are available cheaply on Ebay and are made for boats. Cut to length and secured with a Nyloc stainless dome nut, these replace the nuts and bolts on the pannier frames. 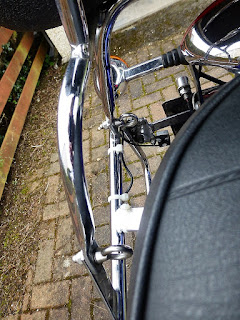 Part of the fun of owning a motorbike is doing these little mods to make it suit the type of riding you do. You never really stop doing it, you can always think of more things to do.