Yes, it's Saturday again, but my computer can't connect to the Internet for some reason, so I've had to use a laptop which can connect via my neighbour's very slow wi-fi connection.
This week's bike is another rarety, the BFG 1300. What is it, you ask - it's French built touring bike that used the Citroen GS flat four car engine.
Between 1982 and 1988, about 650 bikes were built, mostly destined for government agencies. I think this was a political decision so that government agencies weren't seen to be riding foreign bikes, a bit like British Police forces using Norton Rotaries. 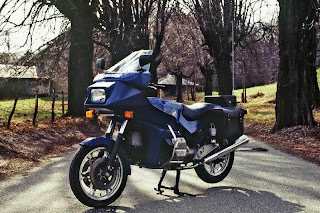 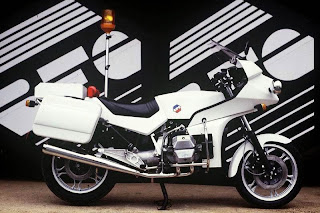 Police version
Also found a picture of one with the bodywork removed, showing the tubular frame. 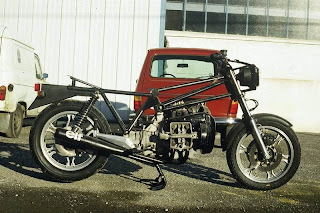 I've no idea what they were like, or how many are still on the road, but enought to support a club.
After BFG collapsed, Louis Boccardo (the 'B' in BFG), lauched the Boccardo motorcycle which used the Citroen AX/Peugeot 205 engine, but that's another 'Friday bike' for the future!
Posted by Norman at 19:03