Look at this picture, and what do you see? 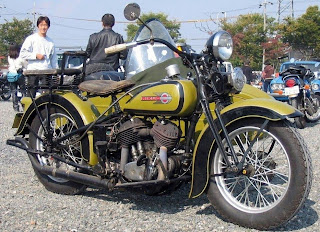 A Harley Davidson? Not quite. It's a Japanese built Rikuo Model 97. (Rikuo means 'King of the Road' in Japanese).
In 1935, Harley Davidson built a factory in Shinagawa, Tokyo to build bikes for the Japanese market. In 1937, due to the rising Nationalism, foreign owned companies were taken over, and the Harley Davidson factory ended up being owned by Sankyo, who continued building bikes under the Rikuo name.
With the onset of WW2, the factory was converted to munitions work and the the bike production was moved to a company called Nihon Jidosha in Horoshima, where the bikes were badged as 'Kuro Hagane' (Black Iron). Needless to say, the Hiroshima factory didn't survive the war, and that was the end of the 'Japanese Harleys'.
I've no idea how many were built, but I would imagine that Japanese Harleys, Rikuos, and Kuro Haganes are very rare. Imagine turning up on any of these at a Harley rally! That'll confuse them!
Posted by Norman at 18:49