At long last, our trip to France for the Coupes Moto Legende started today. Rather than travel together, we decided to meet at a supermarket in Hull. This would give us a chance to fill up with petrol, buy anything that we'd forgotten, and get something to eat that would cost a LOT less than buying a meal on the ferry. We had arranged to meet at 15:00, and although it was only a five hour ride, I left at 07:30 as I was up and ready and I hate 'hanging about' before going anywhere.
The ride down was uneventful, and I stopped for about an hour in Carlisle as I was making such good time. I headed cross country on the A66 towards Scotch Corner, which is neither a corner nor is it anywhere near Scotland!
On the A66 I stopped at the Warcop Army base to take a photo of one of my favourite roadsigns: 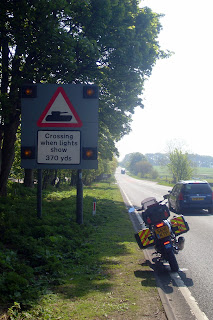 This is where tanks cross the road

I headed on to Hull and was the first of our group to arrive at the supermarket. mr combo arrived soon after, followed by Gareth and Terry. Terry had had a few problems on the way there with the main fuse blowing on his Skorpion. He suspected a short circuit somewhere, so had a good look round the bike for any possible problems and bought a number of spare fuses, 'just in case'.
Suitably fed and fueled, we made our way on the short journey to the docks, but Terry quickly dropped out. I headed back to see if I could help, but he suspected a regulator fault and had phoned the breakdown service. I had to leave him as time was running out and I would miss the ferry. I got to the docks just before they closed the booking in, and waited in the car park with a couple of other riders until we could board. Mr combo and Gareth had already boarded and I found them once I got on board. 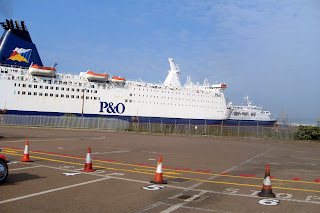 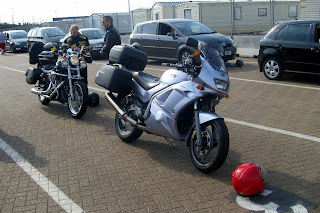 We phoned Terry, and his plan was to be taken home by the breakdown service, replace the regualtor with one from his other Skorpion, then ride down the following day to get the ferry, and catch up with us in Dijon.
Today's mileage was about 300 miles/500km, mostly in clear weather that got warmer as the day went on. Highest temperature I saw on the cheap thermomer I've stuck to the handlebars was 24 C. 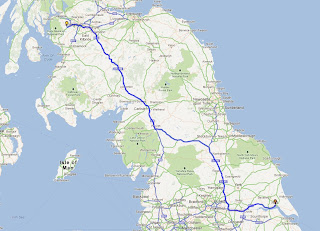