Today's the day! The start of the Coupes Moto Legende.
We were up early for the short ride to the Dijon-Prenois racetrack. Although the racetrack wasn't listed in any of our Satellite Navigators, the town of Prenois was so that's where we headed. As we approached, we had no doubts as to how to get to the racetrack – just follow the dozens of other bikes.
We were guided to spaces in the huge parking area, locked out jackets and boots in our panniers, and locked our helmets to our bikes, and in we went. Having bought our tickets in advance meant that we didn't have to queue to get in.
Once inside, it isn't apparent just how huge the event is. The riders have a huge pits area, the invited teams have garages at the trackside, there is a clubs section, a 'market', and numerous food and drink outlet. Going by previous years, there would have been about 20,000 people there but it never felt crowded. 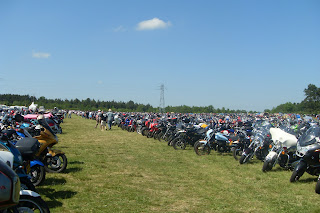 As for the bikes – what can you say. Simply thousands of bikes 'classic' bikes from 25 to 100 years old, plus many former racers – Phil Read, Jim Redman, Giacomo Agostini, and Kork Ballngton to name a few.
I took over 200 photos plus some video, I've posted the photos on flickr, and I'll upload the videos later (if they are any good).
What really surprised me was the number of bikes I'd never heard of before. I would like to think I was knowledgeable when it came to bikes, but there were numerous, mostly French, manufacturers that I'd never heard of before.
And we've got it all to do again tomorrow........