This week's Friday bike is a bit different as we start by talking about a car. The Hillman Imp was a small car built in the 60s in a factory at Linwood, about 3 miles from my house. It was a competitor to the Mini, and its most unusual feature was its engine. Whereas the Mini had a conventional for the time push rod iron engine, the Imp's was an all alloy, OHC unit. It was based on a Coventry Climax design for a portable fire pump engine, which had been used in motor racing. 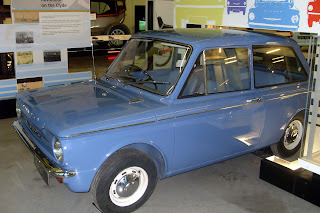 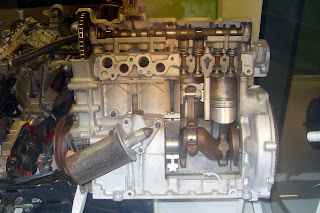 Sectioned engine
When I was young, Imps were fairly popular, and even my local police force, the 'Renfrew and Bute Constabulary' used them as patrol cars. As they were only 874cc, high speed chases were out of the question, and I imagine it was fun getting someone who's been arrested into the back of one against their will! 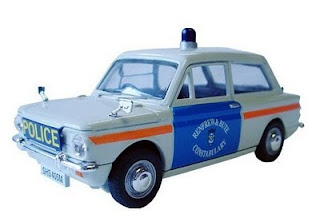 This is actually a model of an Imp Police car.
As the engine was very 'tunable', Imps did quite well in rallying, and the engine found its way into other race vehicles, being quite popular in sidecar outfits. However, eventually, people started building solo bike with Imp engine, usually using Norton Featherbed frames.
I remember reading an article on 'How to do it' and the job was fairly complex, personally I can't see why people didn't just buy a Honda CB 750, but I suppose 'it's a challenge'.
So much of a challenge that I bet most Norton Imp projects were never completed, and there's probably a few still rusting away at the back of sheds.  I found a couple of pictures of one of the better ones: (love the Brasso bottle as catch tank - looks like the owner used a lot of Brasso metal polish!) 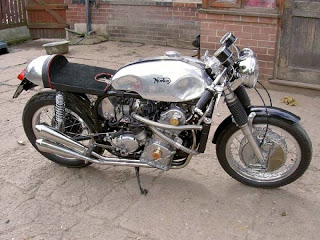 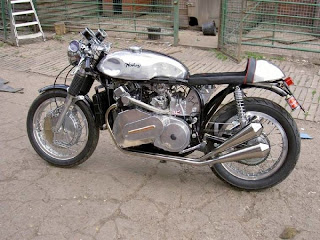 I only ever saw one Norton Imp and it was being raced at Knockhill Racetrack in Fife. Only things I can remember about it was that it wasn't particularly fast and was it seemed to lack ground clearance.
However, the Norton frame wasn't the only one used for Imp powered 'specials', although some just shouldn't have been built!