Awoke to an overcast and cool day as the ferry headed towards Hull. Had been woken through the night by the ship moving around a lot, so the crossing hadn't been as smooth as on the way over. I'd all sorts of fears of the bike having fallen over and broken bits, but when I got down to the car deck it was still upright. Ferry docked and we unloaded, and it was strange riding on the left again. The traffic was fairly heavy, so it was good to get onto the A1 north. This was just as busy (Bank Holiday weekend), and traffic was very slow, sometimes grinding to a complete halt. All the time it was getting colder and more overcast, and as I approached Scotch Corner, drops of rain had started to fall. I stopped at the services at Scotch Corner to put the waterproof liner back into my suit and change to warmer, waterproof gloves, then it was westward on the A66. This proved to be just as busy, with frequent stops, and here were signs warning of 'Horse Drawn Vehicles'.
It was a slow, wet, cold ride across the A66, with strong sidewinds and I saw 8˚C on the exposed high part in the middle, so cold that I had to switch my heated grips on. Just think, less than 24 hours ago I had been eating ice cream in Blankenburge at 25˚C!
The traffic holdups were caused by travellers (no, not the Skorpion kind!) gathering for the Appleby Horse Fair, and as I passed Appleby there were hundreds of caravans and horses.
Once I reached the M6, the weather had improved and it was dry and slightly warmer for the rest of the journey home.

In total I had done 2028 miles/3264 km, the bike had used just over a litre of oil, and I would have loved to have said no mechanical failings, but I had noticed that one of the screws holding the footrest rubber had fallen out! Not bad for a 14 year old bike. 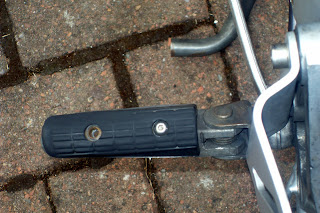 I'll write more about the journey later when I've collected my thoughts, but it was of the best holidays I've ever had, and you CAN tour on a single!