Return of the Friday Bike

I've missed this with being away, being busy, etc., but after the trip to France, there can only one Friday Bike, the 'Majestic'! 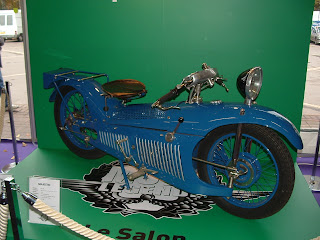 And majestic it is. Have you ever seen a cooler bike? When I got home I did a search for information about this bike, but there's very little out there other than an article on Vintagent and a small entry in the French language Wikipedia.
The Majestic was designed by a Georges Roy, who had owned the 'New Motorcycle' brand of bikes. He contracted the manufacturers of Dollar motorcycles to build the Majestic for him between 1929 and 1933, and approximately 100 machines were believed to have been built. Seems to have been a variety of engines used, mostly 350cc singles, and the ones I saw in France were singles.
What can you say about the styling? Wonderful Art Deco, with 'cooling slots' down the side like racing cars of the era. They also had a suitably styling 'dashboard' 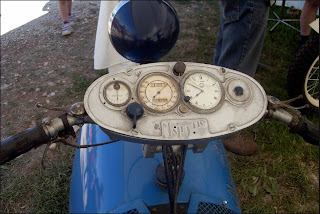 Note clock with Roman numerals and the ammeter says 'Amperes' rather than just 'Amps' - cool!

Rather than type a mechanical description, it's probably best just to link you to the Vintagent article, where they have written a better one than I could!
Some pictures of Majestics I saw in France: 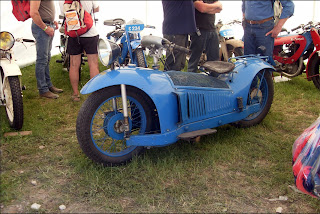 This is possibly the same bike that was in the Vintagent article. Note the 'New Motorcycles' in the background. 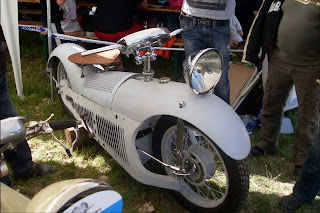 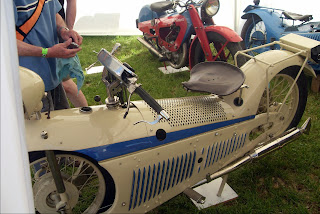 This one went out on the track. Note petrol filler. 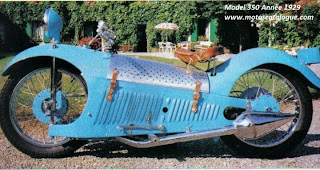 I found this picture on the Web. Like the groovy exhaust!

However, the coolest thing I found about the Majestic was that it's been featured on a postage stamp! 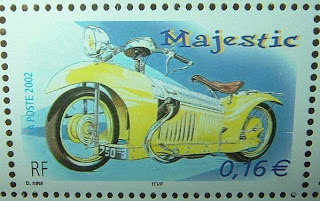