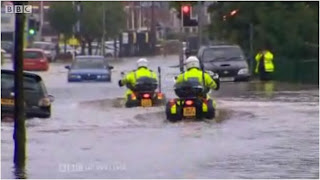 Saw this on a BBC News report on flooding in Northern Ireland. It's near the end here.
I've only ever ridden in water as deep as this once. Many years ago there was a queue of stopped traffic on the approach to the Clyde Tunnel in Glasgow. I made my way to the front to be told by one of the Tunnel staff that their was flooding ahead, and I could 'go through if you think you'll make it'.
Of course I had a go at it, and at first the water wasn't too bad, but got deeper the further I got into the tunnel. I rode the bike (an MZ ETZ 250) at full revs (to stop water blocking the end of the exhaust) and slipped the clutch. Soon the water was up to the footrests, the exhaust note dropped as the end of the pipe was covered, and a there was a lot of steam from the pipe. When I reached the middle of the tunnel (the deepest part), I looked down and the water was over the top of the crankcases but the bike kept going. Eventually I got out the other side and on the 10 mile ride home the rear drum brake didn't work and the gearchange was a bit clunky.
When I got home I dried out the brake and drained the gearbox oil to find a lot of water in it. I also found some leaves in the rear springs as an indication of how deep the water had been.
Probably not a very clever thing to do as the water in the gearbox wouldn't have done it any good, but at least I proved how waterproof my Alt-berg boots were!