After I'd written the last piece and posted it, I went to my bed thinking that was the end of the day. Ho, ho! I was woken in the early hours of the morning by loud, obviously drunken people, speaking English in the corridor outside my room.
As the Formule 1 hotels are the cheapest in France, most of the guests work in the building trade judging by their vans. This has the advantage that as they have an early start in the morning, they go to bed early so the hotel is usually very quite. This also means that the next thing that happened was a lot of angry shouting in French! Eventually I heard someone speaking in heavily accented broken English, and I worked out that the English speakers were so drunk that they couldn't operate the entry keypads for their rooms. The other person had to open their doors for them, and at last it was quiet and I went back to sleep.
I got up reasonably early and went for breakfast. While I was eating, three black teenagers about 15/16 years old came into the breakfast area dressed and acting like rappers or 'gangstas' or whatever they're called this week. They wandered over to the food but looked baffled by it. They picked up pots of jam, looked at them, then said the name in English. At that point one of the staff came over and asked them their room numbers in French. They clearly couldn't understand her, and she didn't speak English, so I went over to translate. They then looked at me and asked 'what do we do?' I explained that the breakfast was self-service and you could eat as much as you liked. I also explained what all the food was. They answered me in very polite standard English with London accents, and it turned out they were a school party and were surprised that their teachers weren't there. Some of their friends were starting to appear, so I told them to tell their friends what to do and that their teachers had probably 'been up late organising things and would be down soon'. I was trying very hard not to laugh at that point. The boys thanked me then turned to each other and started talking in completely bogus 'rap speak' like a cross between 50 Cent and Ali G! I did feel like saying 'you do realise that Ali G was a parody of people like you', but they'll find out soon enough!
I went back to my room to change into my bike clothes and to pack, and when I came down to put the luggage onto the bike and leave, there were more teenagers having breakfast or kicking a ball about in the carpark, but still no sign of their teachers! I would imagine that the parents wouldn't be too pleased if they found out that the teachers had been out drinking and leaving the children to fend for themselves.

Back on the road, and as it was only a three hour or so ride to Zeebrugge even by back roads, I had plenty of time. I decided that I wanted to go to the coast, so headed towards Dunkerque. It started off as a very pleasant ride through small villages with a very welcome cooling breeze, but went downhill a bit as I got caught up with lots of trucks heading for the channel ports. Once in Dunkerque it was very busy, so I didn't stop and headed for Zeebrugge along the coast. I crossed into Belgium and soon arrived in Zeebrugge, with still about five hours to kill before going for my ferry.
I rode around Zeebrugge, but was unable to find either a town centre nor a seafront, so headed 6 km along the coast to the resort town of Blankenberge. It's a very busy seaside town with lots of holiday apartments, shops, restaurants, etc and is, judging by the people, where elderly Belgians go on holiday with their small dogs. It's got a really laid back and pleasant air to it, and although it was starting to get very sunny and warm, there was a gentle breeze off of the sea. 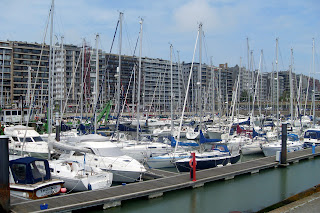 I'd parked next to a small park with tennis courts, mini golf, crazy golf, and something that I'd never seen before. We're led to believe that the game of pétanque is quintessentially French, but this was the first time I'd seen it and it was being played by groups of elderly Flemish speaking Belgian men. 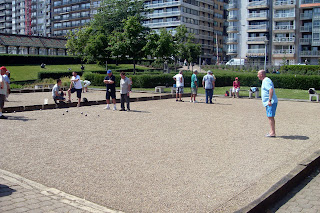 I sat and watched them for a while, and I think I got the hang of the idea of the game, but one thing I learned – the older the player, the better they were! Men in their 80s and 90s were experts at throwing the balls with pinpoint accuracy, and seemed to be able to always beat the 'youngsters' in their 60s!
It was also only men playing, as their wives sat at the side chatting and eating ice cream, but at no time playing.
As Blankenberge is very flat, cycling is very popular with the all the roads with segregated cycle lanes and even separate bicycle traffic lights. Some of the older riders had electrically assisted bicycles and I saw this free charging point next to a major tram stop. 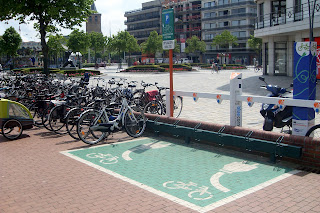 It was strange but this was the only time on the trip where I felt a bit 'alone'. Not because I was on my own, but because it was the only time I'd been somewhere that I didn't understand the language at all. Flemish seems quite impenetrable to an English speaker, and I gave up trying to buy food from a café after reading the menu and not understanding a word. I saw a small supermarket so went to buy something there with mixed results – I got some very nice cakes, but mistakenly bought undrinkable butter milk instead of ordinary milk. I did manage to buy an ice cream by just pointing and smiling, so that made up for it.
It was soon time to head to the ferry terminal and boarded the boat with a large group of Swiss and Belgian riders who were heading to the Isle of Man for the TT. 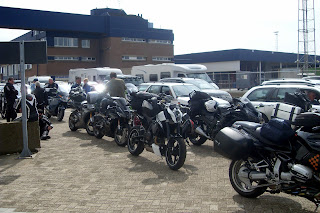 I had a wander round the boat until it was time for bed, and tomorrow I'd be back in Britain. 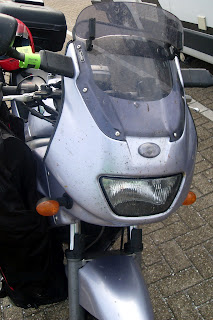 I must have killed about a million flies on this trip!

More pictures here. and 'Song of the Day'.