Some of you may be familiar with the film 'A Clockwork Orange', made in 1971 by Stanley Kubrick and based on the novella by Anthony Burgess. In the UK this has a degree of notoriety, mostly coming from the mistaken belief that the film was so violent that it was banned from being shown.
Although the film is very violent, it was never actually banned, rather Kubrick chose to withdraw the film following threats to him and his wife following lurid newspaper reports and real crimes alleged to have been 'inspired by the film'. It continued to be shown in other countries, and I saw a subtitled version of it during a trip to France in the 80s.
Following Kubrick's death in 1999, the film became available on DVD in the UK, and had a theatrical re-release in 2000.
A few months ago, what should I find in the 'bargain bin' in my local Morrison's supermarket, but a copy of the DVD for 4 or 5 pounds. It was interesting viewing as a bit of a period piece – being made in 1971, it's set in the 'near future' – so looks like 1971 but with slight 'twists' of fashion and style. There's scene set in a record shop where contemporary records are on sale, including Pink Floyd's 'Atom Heart Mother', which was originally planned to provide the film's soundtrack. The soundtrack used is a mixture of classical pieces and specially composed works for the synthesizer written by Wendy (then Walter) Carlos. I believe this was the first film to use a synthesizer soundtrack.
Getting to the point of this post – in one scene in the film, the main characters steal a car (referred to as the 'Durango 95'), and drive at high speed through the countryside forcing other vehicles off of the road. 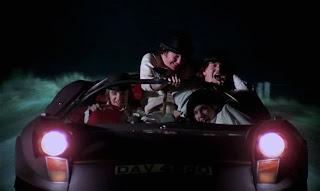 You can't really make out much of the car in the film, but it was one of only three examples of the Probe 16. This was designed by Dennis and Peter Adams, who had previous worked for car company Marcos, as 'an investigation into extremes of styling'. 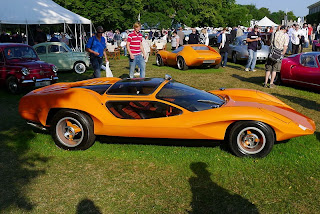 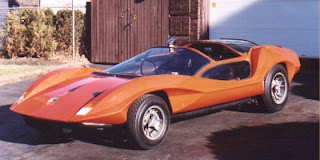 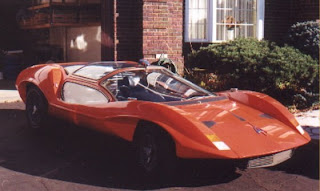 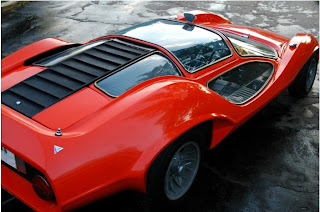 The car was only 34 inches (86 cm) high, and the only access into the seating compartment is via the roof hatch!
Of the three built, only one is still intact – the first model was bought by American songwriter Jim Webb and later burnt out. The second one was bought by Scottish bassist Jack Bruce, who later gave it as a birthday present to his bandmate 'Corky' Laing, who features it on the cover of his book 'Stick It'. 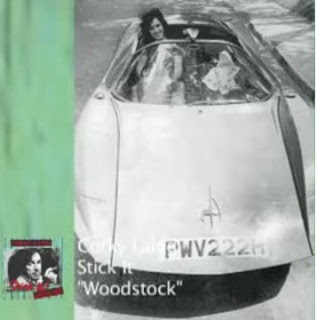 This car is currently in the collection of Canadian Phillip Karam. Website here includes a 'walkround' video.
The third car was on display in the US before returning to the UK. Apparently, during restoration, it was lifted on a hoist and snapped in two!!
A truly exotic car, but slightly let down by its engine. It's a bored and tuned version of that used in an Austin 1800 (aka Giant Land Crab), not exactly a high point of British engineering! 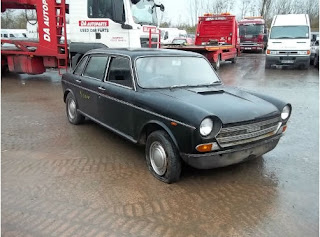