Here's another rarity, and another that I've never see. 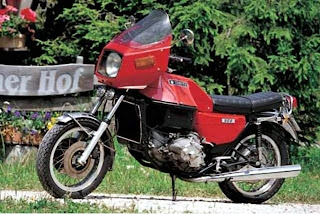 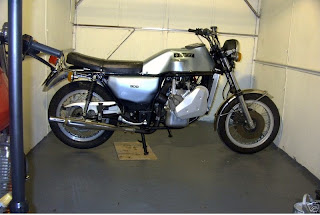 Yes, another car engined bike, this time using the engine from a Fiat 127.

The Shifty 900 was built in Busa of Vigo (Padova) between 1977 and 1982 by Hugh Grandis, who came from Chrysler South Africa. Not more than 70 Shifty were constructed. with a purpose made frame fitted with a 903cc Fiat 127 engine using a variety of cycle parts from Laverda such as the large and powerful rear twin leading shoe rear brake and swinging arm, Marzocchi forks and brembo front brakes, the fuel tank is under a Benelli seat to keep the weight down low.
The drive is through the Fiat gearbox that has had one side of the drive diff locked and a sprocket where the drive shaft came out of the gear box on the other side with a duplex chain to a secondary shaft which has the final drive sprocket on the end.
The bike uses the standard car speedo and rev counter which are fitted into the turtle like shell which covers the large frame
Most of the components derived from other models: the seat was taken by Benelli 906, while the front and rear axles were those of the Laverda SF 750. The power was 45 hp and the motorcycle reacheda speed 170 km / h. The weight of nearly 269 kg.
.It is very quiet ,smooth and tractable you can pull away in almost any gear. very easy D.I.Y maintenance distributor ignition with contact breakers, a single carburettor which gives smoother running than a multi carb a very simple engine with cheap and easy to obtain consumables.

It had an elaborate gear shift system with a 'heel and toe' setup which also moved sideways as it used a car gearbox with a 'gate' arrangement. I can't imagine this worked very well!
About 70 Shiftys were built, and I would have thought it more suited to sidecar use, as it looks a bit too bulky to be ridden as a solo as this magazine cover shows: 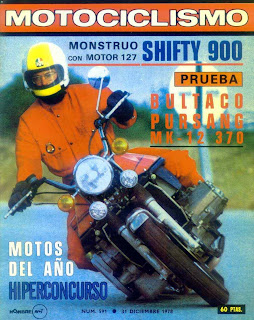 Here's a short film about it (in Italian) in which the gearchange mechanism is referred to.


Found a roadtest (in Italian), and this is what the Fiat 127 looked like, engine suits it a bit better! 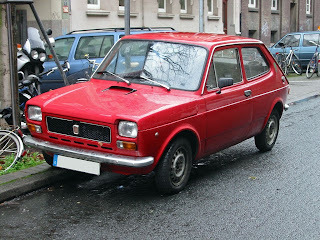